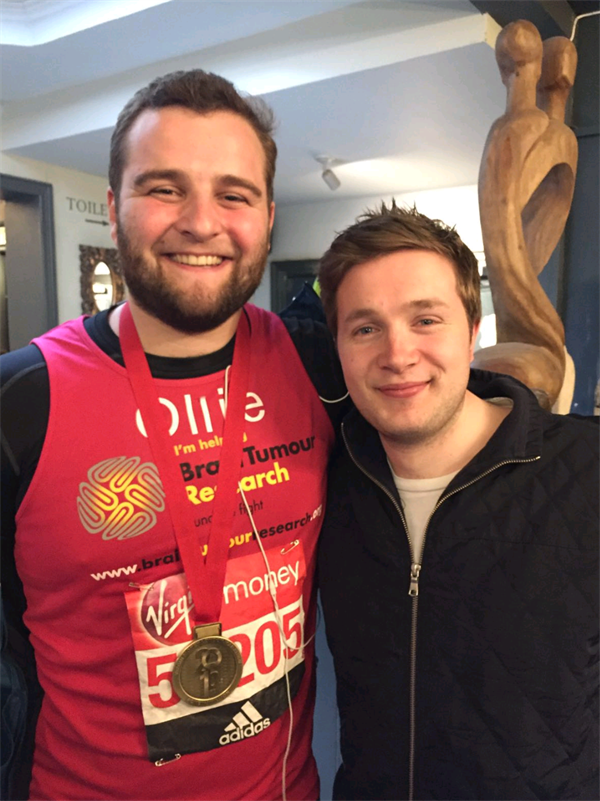 A Clapham man who vowed “never again” after completing the London Marathon has had a change of heart and will run again to help find a cure for brain tumours.

Oliver Hyne, 26, is inspired by a childhood friend who was diagnosed as an infant and will take part in this year’s event and raise money for the Brain Tumour Research charity.

Having previously completed the event for the charity in 2016, Oliver is once again taking on the event to raise vital funds in the name of his friend Charlie Boutwood, who he first met when they were both aged five at school in Eastbourne, Sussex.

Oliver, who works in advertising at Primesight, said: “I promised myself I would not run a marathon again but knowing that I could help make a difference drew me back in. Charlie miraculously recovered from a malignant brain tumour but I know that for many people this isn’t the case. It’s a shocking fact that less than 20% of those diagnosed with a brain tumour survive beyond five years compared with an average of 50% across all cancers.”

Brain tumours kill more children and adults under the age of 40 than any other cancer. Despite this, historically just 1% of the national spend on cancer research has been allocated to this devastating disease.

Charlie underwent surgery to remove a medulloblastoma brain tumour when he was just 20 months old and remarkably recovered after intensive radiotherapy and chemotherapy. Now aged 27, Charlie, lives in Chelsea and works at JC Decaux, also in advertising. After his diagnosis, Charlie’s father Nigel set up Charlie’s Challenge, a member charity of Brain Tumour Research, which has raised more than £1million for research into paediatric brain tumours.

Oliver said: “By running and fundraising for Brain Tumour Research, I want to improve patients’ chances of surviving the disease and also raise awareness about how vital research into brain tumours is.

“It’s going to be a huge challenge for me as I’m a lumbering 18st bloke, certainly not built for marathon running. However, it’s an incredible experience and the crowds and the fact I am running for such a worthy cause will, I am sure, help to propel me over the finishing line.”

Janice Wright, community fundraising manager for Brain Tumour Research in London, said: “Best of luck to Oliver as he trains for the London Marathon. We are extremely grateful to him for taking on such a huge challenge not once but twice in aid of the charity and we hope he inspires more people to join our team.

“The money raised through the London Marathon will help us to fund sustainable research at dedicated Centres of Excellence in the UK. It will also allow us to campaign for the Government and the larger cancer charities to invest more in research into brain tumours in order to speed up new treatments for patients and, ultimately, to find a cure.”

Oliver will join tens of thousands of runners pounding the streets of the capital at Virgin Money London Marathon, the world’s most famous running event, on Sunday 28 April 2019. A few places are still available on the Brain Tumour Research marathon team.

To apply for a place on the Brain Tumour Research London Marathon team email sarah@braintumourresearch.org

To make a donation to Oliver’s fundraising go to www.justgiving.com/fundraising/oliver-hyne