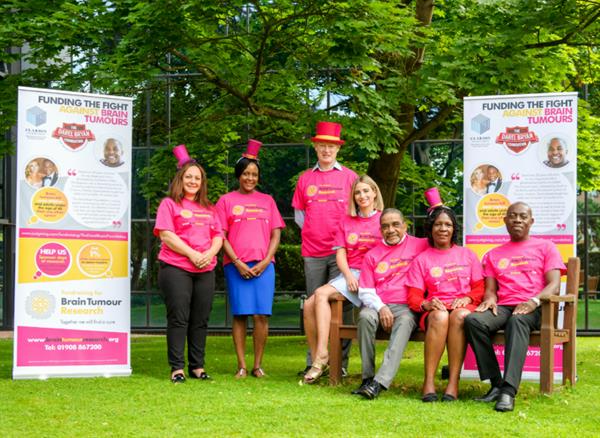 A 34-year-old man who passed away last year after a battle with an aggressive brain tumour, having collapsed at work 15 months earlier, has galvanised his colleagues to take action. They have set themselves a target to raise £100,000 over three years for the fundraising group set up in his memory.

Darel Bryan grew up in Beckenham and in 2008 joined Affinity Sutton in Bromley (now part of Clarion Housing Group) as a Housing Officer. He was following in his mother’s footsteps – Sara Bryan is a Customer Service Advisor also working at Clarion Housing’s Bromley office.

Darel was a keen footballer, playing in a South London league, as well as for a team at work. He and his partner Natalie Overs had bought a flat together in 2013. They had met at Greenwich University in 2004 and, from the very first day, were inseparable, remaining utterly devoted to each other right up until his untimely death in February 2016. Natalie nursed Darel and stayed constantly by his side throughout his illness.

Assistant Head of Housing at Clarion Housing Group, Samantha Littley, who was also a friend of the loved-up couple outside work, remembers the day in November 2014 when it first transpired Darel, then 33, was ill: “I walked in through the doors and could see my colleagues looking devastated. I asked what had happened and was completely shocked that Darel had collapsed and was being taken to hospital (it turned out that he had had a seizure) – he was always so fit and healthy.

“Darel was an inspiration throughout his illness. He wanted everyone to carry on as normal and never talked about it, but it was awful seeing him deteriorate. He was absolutely one of a kind.”

Martin Yuill, also a Housing Officer and one of Darel’s best friends, remembers Darel joining the company, He said: “For about a year, Darel and I worked very closely together because there was just him and me in our team. I have never met anyone like Darel – all our tenants loved him and people still talk about him now. He touched a lot of people’s lives.”

Chief Executive at Clarion, Keith Exford, commented: “Darel was hugely popular and will never be forgotten. The Darel Bryan Foundation was set up by Natalie with the assistance of Darel’s family, under the umbrella of national charity, Brain Tumour Research.  They were devastated that there were so few treatment options available to brain tumour patients like Darel. The Foundation was overwhelmingly voted by Clarion staff as our Charity of the Year and we will do everything to make it very successful, including matching every pound that is raised.

“It was shocking for all of us to discover that brain tumours kill more children and adults under the age of 40 than any other cancer (Darel was just 34 when he passed away), yet just 1% of the national spend on cancer research has been allocated to this devastating disease.”

One of the first fundraising events to take place, was a hugely successful Black Tie Ball in March this year. The Ball held at the Selsdon Park Hotel was instigated by Darel’s team member, Louise Bushell, who explained: “So many people wanted to come as a mark of respect for Darel that tickets sold out very quickly. We raised an amazing £7,500 then, so we decided to make it an annual event. Next year it will be even bigger and better, with our target being to raise a massive £14,000.”

Sara Bryan said: “We hope that Clarion’s fundraising and the work of the Darel Bryan Foundation will help to bring more effective treatments and ultimately a cure for future patients, creating a lasting legacy for our beloved son, so desperately missed.”

Head of Community Fundraising (South) for Brain Tumour Research, Carol Robertson, commented: “We are delighted that Clarion Housing Group are honouring their memory of Darel in this way and have chosen the Darel Bryan Foundation (raising funds for Brain Tumour Research) as their Charity of the Year and we are hugely grateful for their plans to fundraise and raise awareness.

“Brain Tumour Research is striving to fund a network of seven dedicated research centres whilst challenging the government and larger cancer charities to invest more in brain tumour research.  Help us fund the fight. Together we will find a cure.”

Case studies are available in full and more details can be found on our website www.braintumourresearch.org. Keep up to date with the latest news from the charity on Facebook and Twitter.