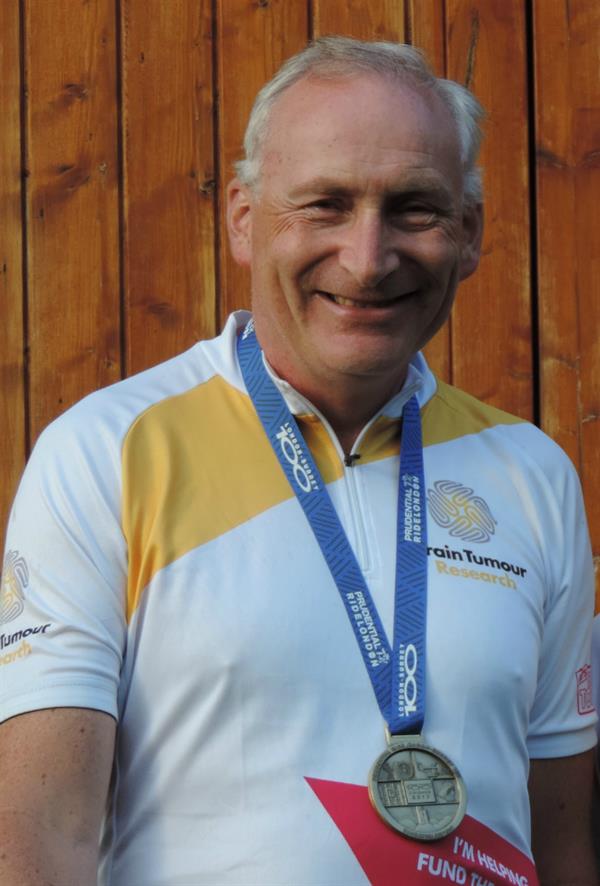 A Wareside man’s admiration for the dignified way his cousin fought a losing battle with a brain tumour has spurred him to complete a gruelling 100-mile cycle challenge for charity.

Michael Barltrop, 55, a recently retired Police Officer, has raised over £1,000 for pioneering charity Brain Tumour Research, which will use the funds for research into finding a cure for this devastating disease.

Michael’s cousin, Peter who lived near Dunstable, Beds, passed away almost a year ago (26th August 2016), soon after his 60th birthday. He had been diagnosed with an aggressive brain tumour in 2014 after suffering a series of seizures and a bleed on the brain.

Michael, who along with his brother Ian from Doncaster, was among 24 cyclists supporting the charity by taking part in Prudential RideLondon, described as “the world’s greatest festival of cycling.” Over 25,000 riders took part in the RideLondon-Surrey 100 mile sportive which set off from the Queen Elizabeth Olympic Park in east London on Sunday 30th July before heading through the capital and out into the Surrey countryside, then returning to the finish on The Mall.

Michael said: “I really enjoyed RideLondon and did better than I had hoped, finishing in 6 hours and 15 minutes, 45 minutes better than my target time.

“The hardest part was the hill climbs, especially Leith Hill, which was steep and narrow. To ride along closed roads through London’s streets and the beautiful Surrey countryside, passing lots of iconic places with so many fellow cyclists was a great experience. It was a real thrill to turn down The Mall with all the Union flags and Buckingham Palace in the distance and then cross the finishing line.

“It was one of those days I will always remember and importantly I was raising money for a cause close to my heart.

“It’s a sad fact that brain tumours can affect anyone at any time but no-one knows what causes them. Treatments for patients like my cousin remain very limited. I hope my efforts will help raise awareness of this awful disease and draw attention to the dreadful under-funding of research which has gone on for far too long.”

Carol Robertson, Head of Community Fundraising at Brain Tumour Research said: “For too long, brain tumours have been a neglected cancer. Stories like Peter’s remind us all that we cannot allow this desperate situation to continue. We are extremely grateful to Michael and his brother Ian for their support and congratulate them on an amazing achievement.”

To make a donation to Brain Tumour Research via Michael’s JustGiving page go to www.justgiving.com/fundraising/Michael-BARLTROP