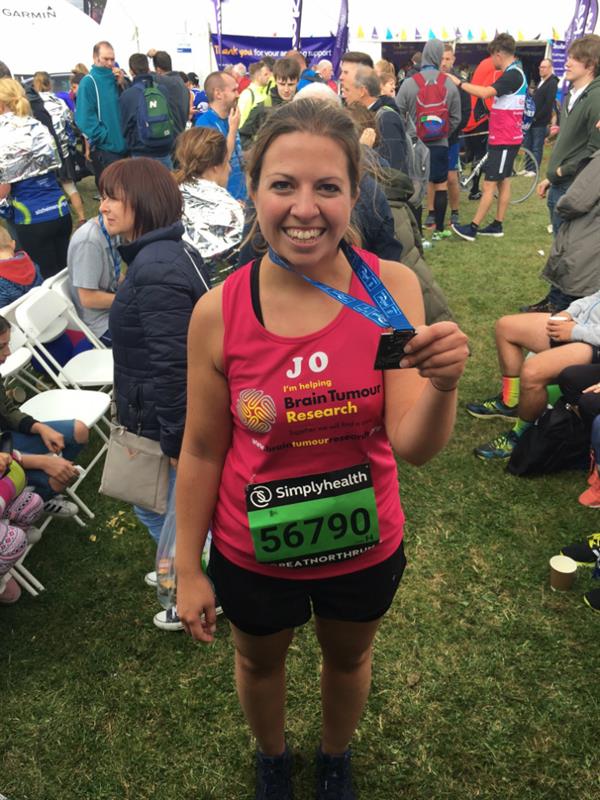 After losing two school friends to brain tumours, one woman competed in the Great North Run to raise vital funds for research into the disease.

Jo Unitt, 29, from Loughborough, took on the challenging course in memory of her school friends, Jake McCarthy and Michael Smith, who both passed away from aggressive brain tumours. Jake’s tumour went undiagnosed and he died suddenly in December 2012. He was just 24 years old. Michael was diagnosed just a few months later, and battled the disease for several years before sadly passing away in late in November 2015, aged 27.

Jo, who studied at Newcastle University along with Michael, was among thousands of runners taking part in the Great North Run, the world’s biggest half marathon. This year’s event took place on 10th September, starting in Newcastle and covering a 13.1-mile route.

A 35-strong team took part in the race to raise money for the pioneering charity Brain Tumour Research which funds a network of Centres of Excellence where scientists are focused on improving treatments for patients and finding a cure. Each day of research costs £2,740.

Jo said: “I met Jake and Mike at Loughborough Endowed Schools, where we were part of a large friendship group that all used to hang around together. They were great guys with a real lust for life, it’s so sad that their lives were cut short by such a cruel disease. I hope my efforts will help raise awareness of the current underfunding for research into brain tumours. More must be done if we are to prevent others from suffering as Jake and Michael did.”

Suzanne McKenna, Head of Community Fundraising (North) for Brain Tumour Research, said: “For too long, brain tumours have been a neglected cancer. Stories like Jake’s and Michael’s reminds us all that we cannot allow this desperate situation to continue.

“Brain tumours are indiscriminate; they can affect anyone, at any age, at any time. What’s more, they kill more children and adults under the age of 40 than any other cancer, yet just 1% of the national spend on cancer research has been allocated to this devastating disease.

“The charity is striving to fund a network of seven dedicated research centres whilst challenging the government and larger cancer charities to invest more in brain tumour research. We are extremely grateful to Jo and all our runners for raising such vital funds to help us find a cure for this horrible disease.”

To make a donation to Brain Tumour Research via Jo’s JustGiving page, go to http://www.justgiving.com/Jo-Unitt