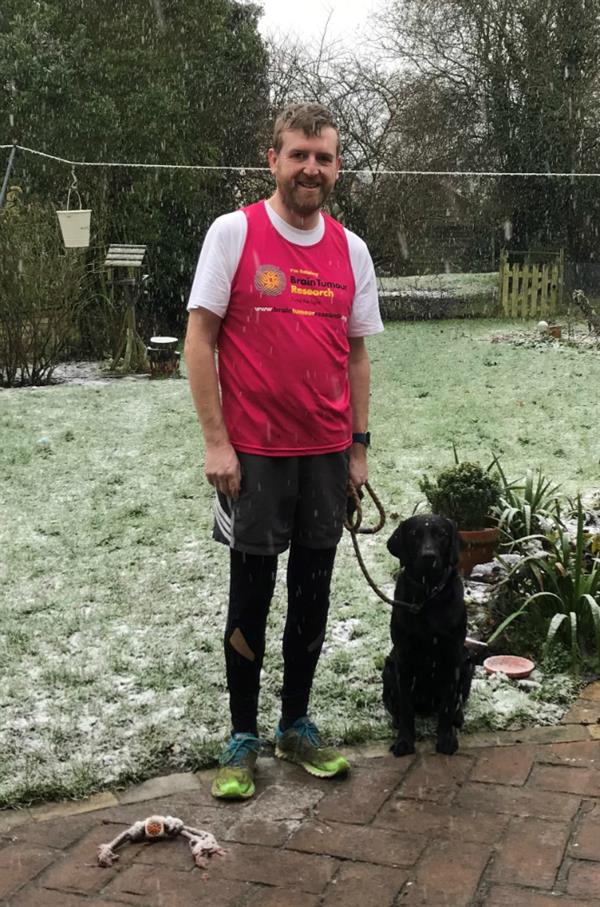 After losing his dad to a brain tumour, one Cambridgeshire man has been inspired to take on this year’s London Marathon to raise funds for research into the disease.

Stephen Riches, 42, from Elsworth in Cambridge, will be taking on the challenge in memory of his dad, John Riches, who passed away from a brain tumour in 2002 when Stephen was just 27.

On Sunday 22nd April 2018, Stephen will be pounding the streets of the capital to raise money for the pioneering charity Brain Tumour Research, which is funding world-leading research to find a cure for the disease.  He has already raised over £1,300 towards his £3,500 fundraising target.

Both Stephen’s dad, John, and grandad, Arthur, were farmers and bred pigs and kept cattle on a mixed arable and livestock farm at Langar Farm, in Edgefield, Norfolk, for over 60 years. In May 2001 John was diagnosed with an inoperable grade four glioblastoma multiforme (GBM), a very aggressive form of brain tumour, after experiencing months of slurred speech and severe neck pain. With the tumour being inoperable he underwent radiotherapy to control its growth, however due to its destructive nature he died less than a year later aged 58.

Stephen, an Asset Planning Process Manager for Anglian Water, said: “I’m not a sporty person, but after running a half marathon for the charity last year I have caught the running bug!  I think my dad would be surprised that I’m taking part but both pleased and proud that I’m doing something to help others.

“After losing my dad to cancer when I was 27, I then lost my mum to breast cancer in 2014. Cancer is such a horrible disease and although over 16,000 people are diagnosed with a brain tumour each year in the UK, little is still known about the disease. I can only hope my efforts will raise vital funds for research to help find a cure for tumours like the one my dad had.”

Brain tumours are indiscriminate; they can affect anyone, at any age. What’s more, they kill more children and adults under the age of 40 than any other cancer, yet just 1% of the national spend on cancer research has been allocated to this devastating disease.

Carol Robertson, Community Fundraising Manager for Brain Tumour Research, said: “For too long, brain tumours have been a neglected cancer. Stories like John’s remind us all that we cannot allow this desperate situation to continue.

“We are extremely grateful to Stephen for his support and are appealing for runners who have a ballot place for the marathon to join him on Team Brain Tumour Research by nominating us as their chosen charity for 2018. Together we will find a cure.”

To make a donation to Brain Tumour Research via Stephen’s JustGiving page go to  https://www.justgiving.com/fundraising/stephen-riches and for more information on applying for one of Brain Tumour Research’s remaining London Marathon places go to www.braintumourresearch.org