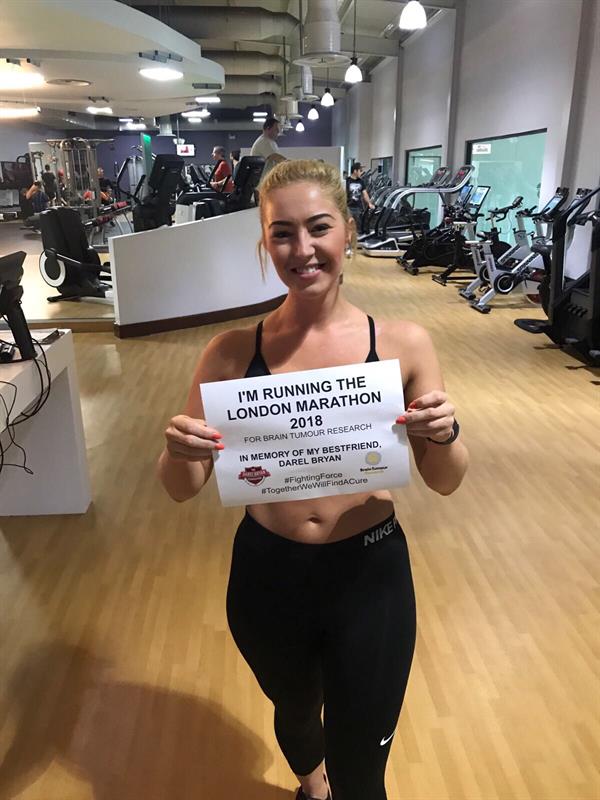 After losing a close friend to a brain tumour, one Greenhithe resident is taking part in this year’s London Marathon to raise funds for research into the disease.

Alexandria Broad-Surry, 23, who has never done much running, although she has always been into sport, including netball and gymnastics, decided it was time to take on a challenge in memory of her great friend, Darel Bryan. Alex has lived in Darel’s flat in Empire Walk, Ingress Park, Greenhithe, ever since he moved to East London, a year or so before he tragically passed away with a brain tumour in February 2016, aged just 34.

On Sunday 22nd April 2018, Alex will be pounding the streets of the capital to raise money for the pioneering charity Brain Tumour Research, which is funding world-leading research to find a cure for the disease.

Darel, an otherwise very fit and healthy 33-year-old, was diagnosed with several tumours after he experienced a seizure at work. A biopsy confirmed that the tumours were grade 4, meaning cancerous. Because of their location, surgery wasn’t initially considered suitable, so Darel underwent gruelling chemotherapy and radiotherapy treatment in an attempt to control the tumours.

Alex said: “I met Darel after first meeting his partner Natalie, who was my manager when we were both working at Golden Square Post Production in 2010. I have never met anyone like Darel and Natalie – they were the perfect couple. We soon became very good friends, calling ourselves ‘The Three Musketeers’. We often went away for weekends together clubbing and to festivals to follow our favourite DJs. We also would go on holiday together to places like Ibiza and Croatia, where we enjoyed our time dancing as music was a great passion that the three of us shared.

“I was so shocked when Natalie phoned to tell me Darel had brain tumours. He was so fit and strong – a keen football player who played every week for his local team in the Sunday league. So why would he get a tumour? There is little known about this disease, so it’s important to me to do what I can and help raise funds for research.

Natalie, 34, of Bow, said: “Darel endured six weeks of radiotherapy, 12 months of five different chemotherapies, two surgeries, over five months of hospital stays and every alternative and natural treatment we could lay our hands on, but his battle was never one he was going to win.

“I am extremely grateful to Alex for her continuing support and for taking on the London Marathon in Darel’s name.”

Since signing up for the London Marathon, Alex’s father, Robert Surry of Longfield, has been diagnosed with lung cancer and a brain tumour at Darent Valley Hospital and has undergone cyber knife radiotherapy at The Royal Marsden Hospital in Chelsea.

Alex comments: “This has given me a real kick to take my marathon challenge even more seriously. I will run, I will walk, I will dance and I will cry… but I will make it to the finish line. I’m doing it for Darel and my dad.”

Janice Wright, Community Fundraising Manager for Brain Tumour Research said: Brain tumours kill more children and adults under the age of 40 than any other cancer, yet just 1% of the national spend on cancer research has been allocated to this devastating disease.

“For too long, brain tumours have been a neglected cancer. Experiences like Darel’s remind us all that we cannot allow this desperate situation to continue. We are extremely grateful to Alex for her support and are appealing for runners who have a ballot place for the marathon to join her on Team Brain Tumour Research by nominating us as their chosen charity for 2018. Together we will find a cure.”

To make a donation to Brain Tumour Research via Alex’s JustGiving page go to https://www.justgiving.com/fundraising/alexandriabroad-surry  and for more information on applying for one of Brain Tumour Research’s remaining London Marathon places go to www.braintumourresearch.org