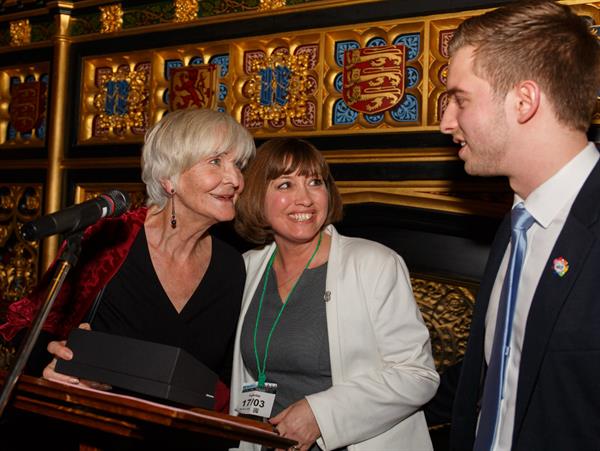 Ali’s Dream, a founding Member Charity of national charity Brain Tumour Research, was set up by the family and friends of Alison Phelan after they lost her to a brain tumour, three weeks before her eighth birthday in June 2001. Today Ali’s Dream is celebrating raising £1 million to fund vital research into childhood brain tumours in her memory.

A charity lunch organised by accountancy firm Hiller Hopkins at Watford FC on 11th May, helped to push Ali’s Dream’s fundraising over the magic £1 million mark.

Alex Bottom, a Principal at Hillier Hopkins, said: “We are over the moon to have been able to help Ali’s Dream reach this astonishing total and are so grateful to our clients and friends for their incredible generosity.”

Actor and author, Sheila Hancock, commented: “No-one can prepare you for the news of a loved one being ill; when my grandson Jack was diagnosed with a brain tumour at the age of four, it was devastating for us all. Jack is now an accomplished young man and together we want to help raise awareness. Just after Jack’s operation, I became patron of the charity Ali’s Dream, and have been proud to watch their developments and contribute to their achievements over the years. I congratulate them on reaching this milestone.

“Thousands of people are diagnosed with a brain tumour every year – more funding is urgently needed so that one day we can find a cure."

Alison’s mother, Julie, explained: “When Ali was diagnosed we were horrified and desperate to do whatever we could. We were told that there was very little treatment available and that it was incurable. My husband, Gary, sent Ali’s scans to America and talked to clinicians late into the night. We also got in touch with an eminent scientist in the field, Professor Geoff Pilkington.

“We were shocked to discover that there was little research and funding allocated to the fight against brain tumours – just 1% of the national spend on cancer research, yet brain tumours kill more children and adults under the age of 40 than any other cancer.

“When Ali passed away, we were determined to make a difference to bring hope to future families affected by brain tumours. We have been overwhelmed with the support we have received from friends, family members, as well as the local community, including St Joseph’s Primary School in Harrow, which Ali attended.

"Over the years we have put on all kinds of events from Balls and Family Fun Days to Clay Pigeon Shoots and Golf Days and supporters have signed up to do everything from Skydives to running events. We have also designed and sold badges, wristbands and Christmas cards.

“In our first four years, we were proud to grant £400,000 to five research projects and in 2007 we collaborated with fellow paediatric brain tumour charity Charlie’s Challenge. Between us we granted a further £350,000 to fund another five projects.

“In 2010, Ali’s Dream collaborated with national charity Brain Tumour Research and Charlie’s Challenge to establish the first Brain Tumour Research Centre of Excellence at the University of Portsmouth. Two years later, we unveiled the Alison Phelan Memorial Laboratory within the Portsmouth Centre, dedicated to research into childhood brain tumours.

“The Centre now employs one of the largest teams of brain tumour research scientists in the UK and gives hope to those families who hear the devastating news that their child has a brain tumour.

“None of this would have been possible without the generosity of the Ali’s Dream fundraising community.

“On top of this, I am proud to say that Ali’s Dream has also led parliamentary lobbying to increase the national investment in brain tumour research through both the Government and larger cancer charities such as Cancer Research UK.

“Ali’s Dream won’t stop until a cure is found for this terrible disease.”

If you wish to help and hold your own fundraising event, make a donation or add your support in any way, please contact Julie Phelan, Ali’s Dream, 30 Hermitage Way, Stanmore, Middx, HA7 2AY Tel: 0208 863 6068