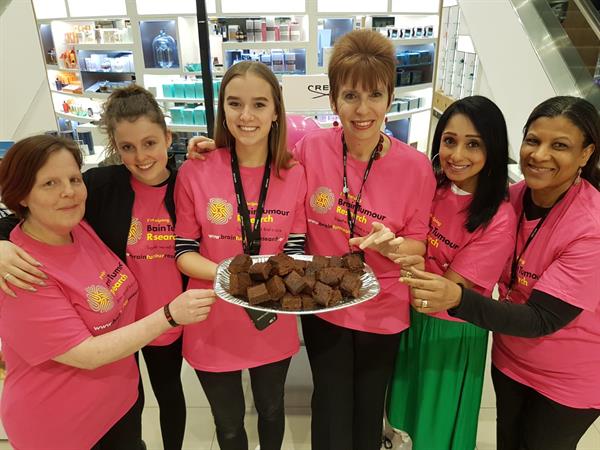 An employee’s death from a brain tumour has inspired John Lewis High Wycombe to support research to help find a cure for the disease.

Andy Graham, from Hughenden Valley in Buckinghamshire, worked at the branch for 29 years as the resident camera expert. The 52-year-old had been experiencing dizzy spells and vertigo on the shop floor and was eventually referred for an MRI scan which revealed a low-grade haemangioblastoma tumour located on his brain stem.

The dad-of-two underwent surgery to remove the tumour but due to its location, surgeons were unsuccessful and over the next 18 months, despite surgery, Andy deteriorated. Following a fall in A&E, Andy then suffered from bleeds on his brain and multiple seizures and on New Year’s Eve 2017, Andy passed away at John Radcliffe Hospital in Oxford, leaving his wife Gill and sons, Oliver and Daniel.

Gill said: “Andy loved his job and was a loyal John Lewis employee for almost three decades, which is why I’m so delighted that the store is now supporting the Brain Tumour Research charity in his memory.”

One of Andy’s managers, Mark Hastings, appealed to the store to choose the Brain Tumour Research charity as its charity of the year after witnessing the devastating impact the disease had on Andy. He said: “Seeing Andy’s demise was traumatic to say the least. It made me realise that this could happen to anyone and the fact that the disease is prevalent in younger adults really struck a chord.”

Dawn Stokoe, Community Liaison Co-ordinator at the store, said: “Andy is sorely missed here, he was such a fun character and the customers always enjoyed talking to him. Other colleagues here have also lost loved ones to brain tumours which is why are determined to support the Brain Tumour Research charity.”

Sheeba Sadanandan, a sales assistant at John Lewis High Wycombe, lost close friend, Sarah Pestana, to a brain tumour in June 2017. Sarah, a mum-of-two from High Wycombe, died from a highly aggressive glioblastoma tumour, at the age of 48. Leaving behind her husband and two sons, Sarah’s death came just 34 days after her diagnosis.

Sheeba said: “Sarah and I were friends for over 16 years so it was heart-breaking to see a brain tumour claim her life so suddenly. Her father was killed by the exact same tumour six months before and it’s just so unfortunate that this indiscriminate disease has hit their family twice.

“I can’t sit back and watch brain tumours continue to destroy families like this which is why I was so pleased that our store has chosen to support research into a cure.”

The store, situated on Holmers Farm Way, will support the Brain Tumour Research charity over the course of the year through a variety of fundraising activities such as ‘bushtucker’ trials, an Indian chef experience and a sponsored car wash.

Michael Thelwall, Head of Community Fundraising at the Brain Tumour Research charity, said: “We are honoured to be John Lewis High Wycombe’s Charity of the Year. This collaboration will help us in our mission to build a network of experts in sustainable research at dedicated UK Centres of Excellence. Ultimately, this will lead to better outcomes for patients – from improved awareness for earlier diagnosis, to the development of more effective personalised treatments and targeted drugs. Through the funds generated, we will be able to significantly fast-track progress towards finding a cure for brain tumours.”