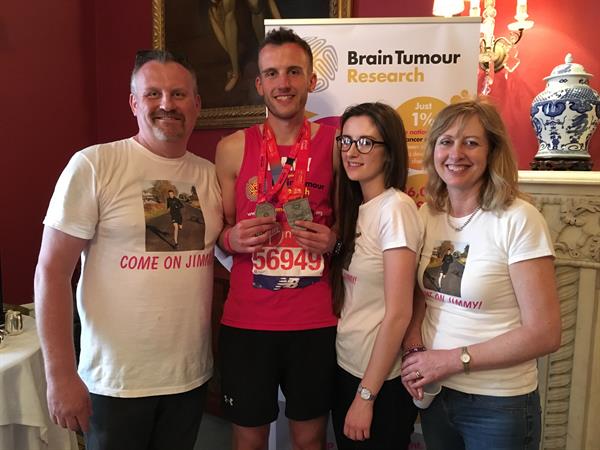 A university student with a brain tumour has completed the London Marathon to raise funds to help scientists find a cure for the disease.

James Wardle, 21, from Markfield, Leicester, discovered he had a slow-growing tumour in February 2016 after being struck down with seizures which left him temporarily paralysed and unable to call for help.

Now, two years after the shock diagnosis, James has raised more than £6,000 for the pioneering charity Brain Tumour Research which funds a network of Centres of Excellence where scientists are focused on improving outcomes for patients and, ultimately, finding a cure.

James’s tumour, a dysembryoplastic neuroepithelial tumour (DNET) is classed as low-grade and, following treatment, he has been able to continue his studies in mechanical engineering at the University of Sheffield and, crucially, train for the iconic running event.

He said: “The London Marathon has always been number one on my bucket list and there is no better time than now. For obvious reasons, Brain Tumour Research is very close to my heart and, as well as raising money, I hope my efforts will also help to raise awareness of the startling statistics around this disease.

“Without an invasive biopsy, there is no way of knowing 100% if my tumour is non-cancerous but the doctors are as sure as they can be. If it grows, it may require surgical intervention in the future but, for now, I will continue to have annual MRI scans and hope that it remains stable.

“I am now in my third year at uni and, if necessary, I am able to have additional time for assignments in the run-up to exams in order to reduce the stress which brings on my seizures. The diagnosis has been difficult for us all psychologically although I would much rather it be happening to me than to anyone else in the family.”

James, who crossed the line with a time of 4:44:50, was one of 40,000 runners taking part in the event which was started by The Queen from the grounds of Windsor Castle. It was the 38th London Marathon to take place since the first on 29th March 1981.

Michael Thelwall, Head of Community Fundraising for Brain Tumour Research, said: “James’s determination and commitment are fantastic and I hope his story will provide inspiration to others whose lives have been affected by a brain tumour.

“Brain tumours kill more children and adults under the age of 40 than any other cancer – and more men under 45 than prostate cancer -  yet just 1% of the national spend on cancer research has been allocated to this devastating disease.

“For too long, brain tumours have been a neglected cancer. Experiences like James’s remind us all that we cannot allow this desperate situation to continue. We are extremely grateful to him and offer our congratulations to everyone who took part in this year’s event to raise money for charity.”