I don’t want to sit in another crematorium asking, "Why?" – Poole resident loses five loved ones to brain tumours 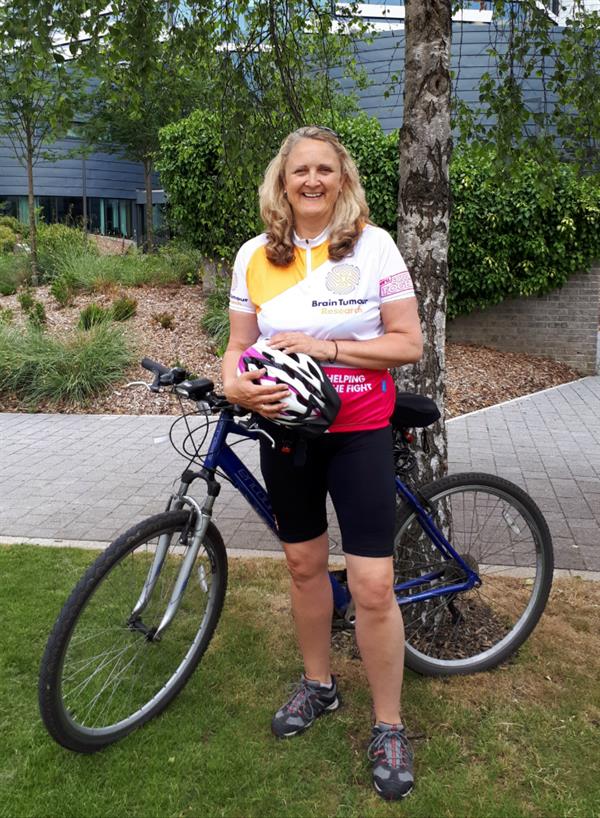 A Poole resident is calling for more funding for research into brain tumours after the disease killed her father and four friends.

Sarah Hopkins, aged 52, is now taking part in Prudential RideLondon in memory of those lost to the disease and to raise funds and awareness for the Brain Tumour Research charity. Astonished by the prevalence of brain tumours and the lack of funding which is allocated to research into a cure, Sarah will tackle the gruelling 100-mile cycle in a bid to make a difference.

Geoff Hopkins, Sarah’s dad, died at the age of 61, just six months after being diagnosed with two brain tumours. Recently retired from his job as a sales manager in the Middle East, Geoff was looking forward to spending his retirement in France when he received the news in January 2001. Despite having overcome bowel cancer 10 years previously, Geoff and his family were shocked at the aggression of his brain cancer.

Sarah has also grieved the death of several volleyball friends. Angela Cowell, a former England international player and manager of England and GB Senior Women teams, died at the age of 53 after two tumours were found in her brain. The Portsmouth resident underwent two operations but deteriorated and died in February 2017 at Rowans Hospice.

Three of Sarah’s friends have been killed by the most aggressive type of brain tumour: a glioblastoma multiforme (GBM). Linda Insley, who Sarah knew from the Speedwell Volleyball Club in Bristol, was aged 55 when she was diagnosed with a GBM. The mum-of-two sadly on Christmas Eve 2017, 11 months after her diagnosis. Ivor Paul, who was an integral part of Speedwell men’s team, national champions on numerous occasions, also died following a GBM diagnosis at 61; and Curtis Palmer, a policeman from Poole, who was diagnosed with a GBM and died aged only 28.

Sarah, who works as an employability assistant at Bournemouth University said: “I’m just astounded that so many people are suffering and dying from brain tumours and yet only 1% of the national spend on cancer research has been allocated to find a cure. I don’t want to sit in another crematorium asking ‘why?’

“I’m really quite nervous about taking part in RideLondon as it’s going to be the toughest thing I have ever done both mentally and physically. I also feel that I’m representing my Dad and friends who have been taken by this awful disease and I don’t want to let them down.”

Aiming to raise at least £800 for the charity, Sarah is among 24 cyclists supporting the Brain Tumour Research charity by taking part in Prudential RideLondon, one of the world’s greatest festivals of cycling. Some 25,000 are expected for the RideLondon-Surrey 100-mile sportive which will set off from the Queen Elizabeth Olympic Park in east London on Sunday 29th July before heading through the capital and out into the Surrey countryside and returning to the finish on The Mall.

Brain tumours kill more children and adults under the age of 40 than any other cancer but just 1% of the national spend on cancer research has been allocated to this devastating disease. The charity is striving to fund a network of seven dedicated research centres whilst challenging the Government and larger cancer charities to invest more in brain tumour research.

Emma Cronin, Community Fundraising Manager for the Brain Tumour Research charity, said: “For too long, brain tumours have been a neglected cancer. The deaths of Geoff, Linda, Curtis, Angela and Ivor remind us all that we cannot allow this desperate situation to continue. We are extremely grateful to all our riders for their support and wish them well.”

Make a donation to the Brain Tumour Research charity via Sarah’s JustGiving page.