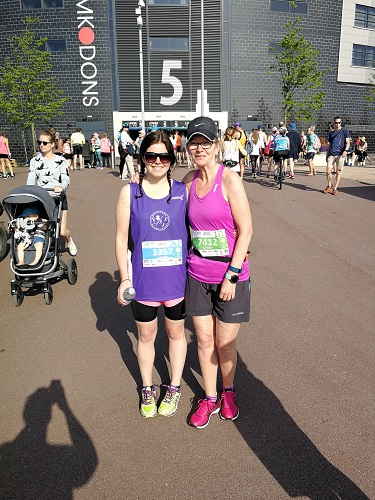 A woman from Daventry has completed a gruelling 100km run to honour her mum, who survived a brain tumour.

Louise Balloch tackled the arduous Race to the Stones – an endurance race, which finishes at the impressive Avebury stone circle in Wiltshire – in blistering heat. She took on the challenge to raise awareness and funds for the Brain Tumour Research charity, after running with her mum, Karen Balloch, throughout her illness.

HR advisor Louise, aged 23, said: “While my mum was ill, she was told she should not be running alone, something which she loved doing. This is when I stepped up and went on my first jog and now it seems only right that to have taken part in a running event to raise money for this worthy cause.”

Karen, a 55-year-old accountant, was diagnosed with a brain tumour after suffering from severe headaches and problems with her eyesight in August 2015. Now, after a gruelling two rounds of surgery and radiotherapy, scans have shown no sign of the tumour and Karen has made a remarkable recovery.

Louise, who has raised over £1,500 for Brain Tumour Research, added: “I don’t want other people to have to go through what my mum or my family has. She has been incredibly lucky, brave and strong to fight off her tumour. Due to the lack of current research, there is still a long way to go and too many lives are lost to this cruel and very underfunded disease.”

Also joining Louise on the challenge was Luke Reeves, a company director at Move Our Way. Luke’s nan, Lyn Reeves-Wright, from Birmingham was diagnosed with a brain tumour in November 2017 after suffering a minor stroke and sadly died just weeks later, aged 71.

Luke said: “My nan was an incredible woman who fought a brave battle. Though I miss her more than anything in the world, raising awareness for this vital cause is so important to ensure other families don’t have to go through the same thing. We went through a million emotions during the run but were incredibly proud of our achievements.”

Louise and Luke, along with Dan Day and Paul Barker, were some of 2,700 runners taking part in the event on Saturday 14th July, which traverses Britain’s oldest long-distance path. Cutting through the Chilterns and the North Wessex Downs, it was the sixth time the event has taken place.

Michael Thelwall, Head of Community Fundraising for the Brain Tumour Research charity, said: “Louise and Luke’s determination and commitment are fantastic and I hope they will provide inspiration to others whose lives have been affected by a brain tumour.

“For too long, brain tumours have been a neglected cancer. Sadly, less than 20% of those diagnosed with a brain tumour survive beyond five years compared with an average of 50% across all cancers.”

To make a donation to Brain Tumour Research via Louise’s JustGiving page go to:
https://www.justgiving.com/fundraising/louise-balloch


Notes to Editors
Brain Tumour Research is the only national charity in the UK dedicated to raising funds for continuous and sustainable scientific research into brain tumours, and we are a leading voice calling for greater support and action for research into what scientists are calling the last battleground against cancer.