Husband lost to brain tumour is remembered at Research Centre 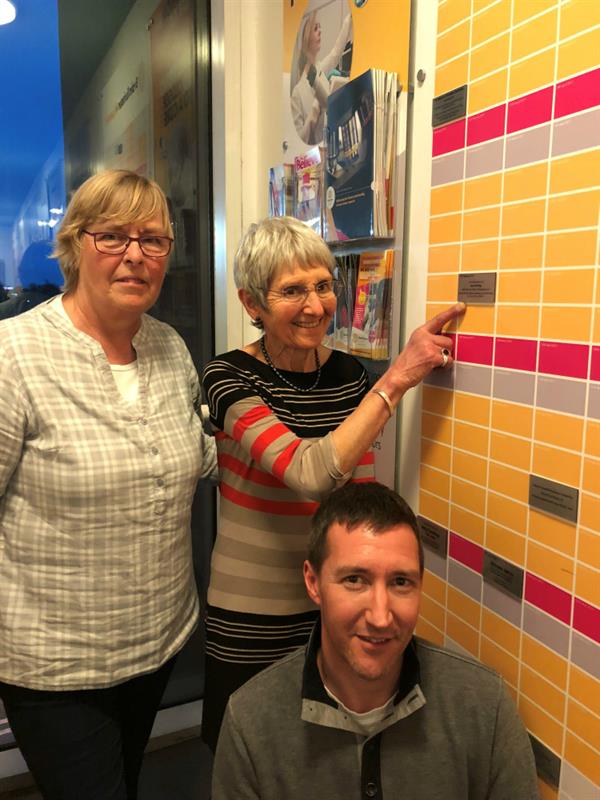 A wife who lost her husband to a brain tumour is helping to fund scientific research into finding a cure for the disease.

Jenny Farthing, 69, from Winchester, chose to fundraise for the pioneering charity Brain Tumour Research after her husband Guy died from a brain tumour in October 2017. Through hosting a number of fundraising events, Jenny and her family have raised over £5,700 to go towards research into the disease.

Jenny was joined by their son Mark, as well as Guy’s younger sister Diana, to place two tiles on the Wall of Hope at the Brain Tumour Research Centre of Excellence at the University of Portsmouth. The centre, one of four receiving funding from the charity, is focused on research to improve treatments for patients with brain tumours and, ultimately, finding a cure. Each tile laid on the wall represents the £2,740 it costs to fund a day of research.

Passionate about all things gardening and loving the slow pace of games like croquet, Guy was diagnosed in 2008 with a low-grade brain tumour after suffering from seizures, that were initially diagnosed a small stokes.

After winning a number of awards at Chelsea Flower Show, Hampton Court and Tatton Park, Guy retired from his career as a garden designer in 2012 to set up a small plant nursey from the family home. In 2015 he was admitted for a biopsy where it was revealed the tumour had grown and he would have to undergo treatment. Sadly, in October 2017 Guy passed away from the tumour, leaving behind, Jenny their two children, Mark and Katy and granddaughter Immie.

Jenny said: “Guy was a wonderful man with such a passion for making the most out of the life and for being outside in the garden. Being at the research centre all together and seeing what they are doing here, really draws attention to the cost of research and work that needs to be conducted to find a cure for brain tumours.”

Tim Green, Community Fundraising for Brain Tumour Research, said: “We are really grateful to Jenny and her family and friends for raising vital funds to support important research into a disease which affects so many people and their families each year. Stories like Guy’s remind us all that we cannot allow this desperate situation to continue.”