Husband lost to brain tumour is remembered at Centre of Excellence 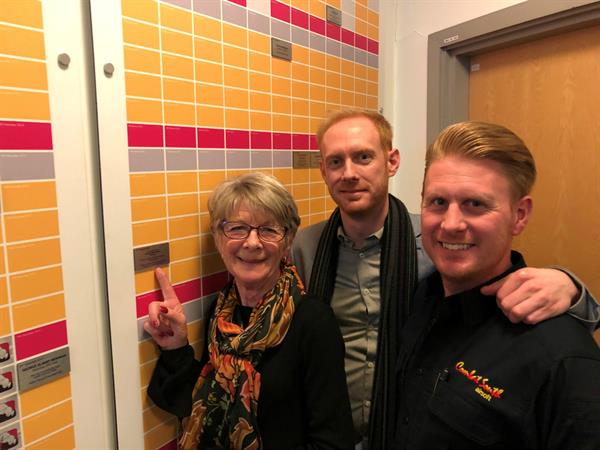 A wife who lost her husband to a brain tumour is helping to fund scientific research into finding a cure for the disease.

Judith Banks, 66, from Waterlooville, chose to fundraise for the pioneering charity Brain Tumour Research after her husband Stephen died from a brain tumour in September 2016 at the age of 64. Through hosting a number of fundraising events, Judith and her family raised nearly £6,000 to go towards research into the disease.

Judith was joined by their sons Paul and Russell, along with Russell’s partner Jenna and friends Stevie and Beverly, to place two tiles in Stephen’s memory on the Wall of Hope at the Brain Tumour Research Centre of Excellence at the University of Portsmouth.

Stephen, who was the owner of Combat South in Portsmouth for nearly 20 years, was diagnosed in 2010 with an aggressive brain tumour after suffering from numbness in his right side. Despite being given a devastating prognosis that he was unlikely to survive another year, Stephen battled through chemotherapy and radiotherapy to live for a further six years. Judith is thankful that he got to spend this precious time with his two sons and his new grandchildren, Lucas and Alina before he died.

Judith said: “Stephen was an amazing man with such a passion for making the most out of the life you have. Even after he was diagnosed in 2010 and given the devastating news that he might have as little as six months to live, he remained positive and hopeful that he would beat the disease.  Being at the research centre and seeing what they are doing here, really draws attention to the cost of research and work that needs to be conducted to find a cure for brain tumours.”

Tim Green, Community Fundraising Manager for Brain Tumour Research, said: “We are really grateful to Judith and her family and friends for raising vital funds to support important research into a disease which affects so many people and their families each year. Stories like Stephen’s remind us all that we cannot allow this desperate situation to continue.”