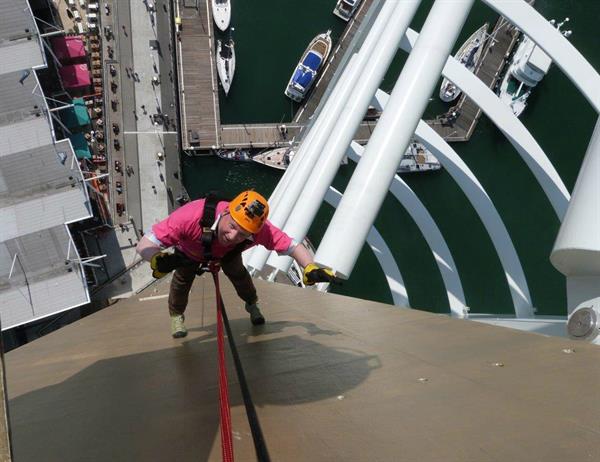 A husband whose wife is living with a brain tumour faced his fear of heights to abseil 558ft to fund research into and raise awareness for the disease.

Tony Pike, from Baildon, Yorkshire, took on the challenge to abseil the iconic Spinnaker Tower in Portsmouth three years after his wife Lisa Brassington completed the event herself.

After experiencing a blockage in her right ear, Lisa was diagnosed with a low-grade astrocytoma in 2011. However, a year later, doctors realised the tumour was in fact a grade 2 oligodendroma. The 49-year-old then underwent an awake craniotomy at Leeds General Infirmary in 2012 but, due to the tumour’s location, doctors were unable to remove it all. The tumour continued to grow and in July 2016, Lisa underwent radiotherapy and chemotherapy treatment and now has regular scans to monitor the growth.

Tony is hoping to raise £6,000 for the Brain Tumour Research charity to add to the excess of £2,000 Lisa raised with her event.

As the highest building in the city, the Spinnaker Tower offers breathtaking views of the Solent and beyond. Many of those who joined Tony on the abseil had also been affected by brain tumours in some way and were participating in memory of a family member or friend.

Tony, who works as a Head of Sales at JLT Investment Solutions, said: “Despite her illness, Lisa undertook this abseil, raising a significant amount for research into the disease, and now it’s my turn. The adrenaline was high as I launched myself of the Spinnaker Tower but I’m glad I went through with it.

“Lisa’s determination is an inspiration to me. Despite her diagnosis, she continues to live life to the full, having taking up sailing and appearing as an extra on Emmerdale. I faced my fears and I hope my efforts will help raise awareness of this awful disease and draw attention to the underfunding of research which has gone on for far too long.”

Andrea Pankiw, Community Fundraising Manager at Brain Tumour Research, said: “We are extremely grateful for Tony’s support and congratulate him on completing the challenge. The money raised will help us in our mission to build a network of experts in sustainable research. We are funding dedicated UK Centres of Excellence where scientists are focused on improving outcomes for patients and, ultimately, finding a cure.

“For too long, brain tumours have been a neglected cancer and stories like Lisa’s remind us all that we cannot allow this desperate situation to continue. Sadly, less than 20% of those diagnosed with a brain tumour survive beyond five years compared with an average of 50% across all cancers.”