“He could have been our first black Prime Minister but, at 21, he was cut down by a brain tumour” MPs hear of tragic burden of the disease 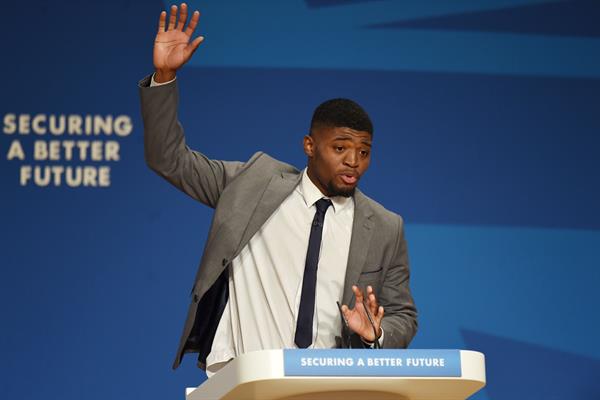 A bereaved woman whose son died at the age of 21 from a highly aggressive brain tumour was among other relatives and patients at Westminster today as MPs were told of the “unbearable” burden of the disease.

Alexander Paul died 17 months ago, a little more than a year after he was diagnosed with a highly aggressive glioblastoma multiforme (GBM) brain tumour. Intelligent and charismatic, Alexander undoubtedly had the brightest of futures ahead of him and, after addressing the Conservative Party Conference on national policing policy, was even touted as a potential future prime minister.

His mum Joanna Brown, from Crystal Palace, said: “Alexander was at college in Clapham when he took part in a focus group on police stop and search policy. From there he was invited to feedback directly to the then Home Secretary Theresa May and that was followed by a dramatic invitation for him to address the 2014 Conservative Party Conference.

“I almost burst with pride watching my son address the leaders of our country, an 18-year-old black boy who had yet to vote was contributing to a review of national policing policy. Some of his friends half joked he could have been the first black Prime Minister and, after that, Alexander’s talk was of being a lawyer, a journalist, or a politician.”

But three years after his speech, Prime Minister Mrs May used the same conference platform to announce the young man’s death. In the intervening period he had been given the terminal diagnosis, underwent surgery, tailored his diet, and underwent six weeks of radiotherapy followed by chemotherapy. Alexander also travelled to Germany for treatment, which was paid for partly with money borrowed from friends and through crowdfunding.

His devastated mum, a lawyer, was attending the All-Party Parliamentary Group (APPG-BT) on brain tumours as it held it launched the group’s new report Brain tumours – a cost too much to bear? published today.

The report on the economic and social impact of brain tumours is the result of a Parliamentary inquiry which received more than 200 online submissions from patients and their families and comprehensive written submissions from charities and academics. It also held oral evidence sessions during June and July from researchers, doctors, surgeons, academics, representatives of drug companies as well as brain tumour patients of all ages and their families.

Ms Brown’s poignant words feature in the report: “Alexander had the world at his feet but our nightmare was about to begin. It is this sense of crushing loss, this waste of potential that haunts my days. He did so much but could have done so much more. When Alexander was diagnosed with a glioblastoma in March 2016, I did everything I could but I couldn’t save my son and he died in June 2017.

“Our tragedy is a wider tragedy also, as society needs men like my son, Alexander.”

Derek Thomas MP for St Ives and Chair of the APPG said: “It was impossible not to have been personally affected by the wealth of emotionally compelling personal stories we heard during the course of this Inquiry and my most heartfelt thanks go to all of the brain tumour patients and their families who helped us with this report. For those of us who were privileged to hear this evidence first hand it was an experience that will stay with us for a very long time. Over the coming months and years, we will use the results of this Inquiry to keep brain tumours on the political agenda and improve outcomes for brain tumour patients.”

Sue Farrington Smith MBE, Chief Executive of the Brain Tumour Research charity, said: “We are extremely grateful to Joanna for her courage in sharing her very personal story which demonstrates why we must continue to highlight this issue and do everything we can to improve outcomes for brain tumour patients.