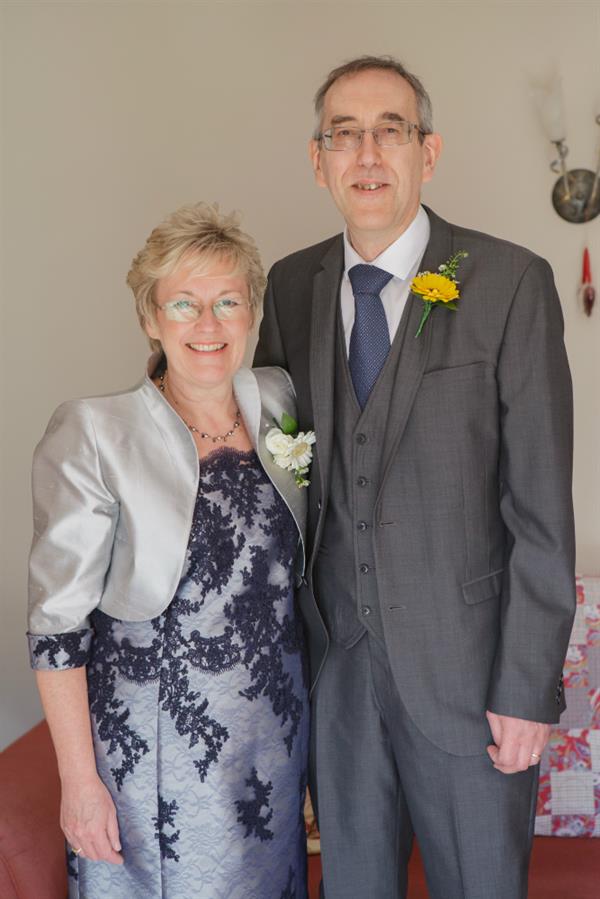 A Harlington woman whose husband and the father of their two grown-up daughters passed away after a 20-month battle with a brain tumour a year ago on 27th August, is telling the story for the first time.

Peter, an electronic engineer for BT, endured a series of seizures, a bleed on the brain and subsequent surgery before he was diagnosed with a grade 4 glioblastoma multiforme brain tumour in January 2015.  He passed away soon after his 60th birthday, leaving his wife Jane and daughters, Alice and Emma heart-broken.

The three women have since set up The Fluffy Cloud and Co to raise vital funds for game-changing charity Brain Tumour Research to leave a lasting legacy for Pete.  To date over £8,000 has been raised by The Fluffy Cloud and Co via a number of events, including donations at Pete’s funeral, a plant sale, craft stall and two of Pete’s cousins taking part in Ride London (a 100 mile cycle challenge).

Jane, who works as a inclusion manager at William Austin Infant School, Luton, explains: “I met Pete when I was training to be a teacher. He was such a kind, gentle man, very tolerant and easy to be with.  He was also huge fun, so life with him was always exciting.  We went to lots of concerts, including the Rolling Stones and Bruce Springsteen.  I am so thankful for so many great memories.

“It was in the middle of one night in October 2014 that Pete woke me. I don’t know whether he jerked or what, but I leapt out of bed and found my glasses and called for an ambulance.  It was thought he had suffered a stroke or a small heart attack.

“A month later, we were in a restaurant when Pete had what turned out to be a seizure.  It lasted for about 15 minutes.  We went to the nearby hospital in Harlow where Pete had an MRI, but, with nothing conclusive, he was given seizure medication.

“Almost like clockwork, Pete began experiencing incidences every month.  I started dreading them.

“He was finally diagnosed in January 2015 with a brain tumour.

“In April of the same year, Pete had emergency surgery to remove the tumour when scans revealed that it had grown to the size of an orange. It was then that we were given the shocking news that Pete had a grade 4 glioblastoma multiforme (GBM4), the most aggressive and deadly type of brain tumour.

“Pete underwent radiotherapy and chemotherapy and never complained, despite the fact that his treatment seriously impaired his mobility. He put a lot of effort into getting himself fit again, particularly through Active Luton (a fun programme to encourage exercise among cancer patients) and took up yoga to strengthen his back as he had suffered two crushed vertebrae, thought to be as a result of the treatments making his bones brittle.

“On 18th August 2016 we finally got some good news: Pete was in remission!

“Just a week or so later, having got up early to make cheese scones for the Harlington flower and vegetable show where we were going to have a craft stall to raise money for Brain Tumour Research, I went back into the bedroom and found Pete on the floor. Tragically, paramedics failed to resuscitate him.

“Whilst it is a mystery how Pete died, and whilst cancer and its rigorous treatment most certainly had some part to play, we are all glad that he didn’t die of the tumour.  I tell myself that we have been blessed.  Even though at 60 Pete was very young to die, we were saved from the inevitable slow and agonising process, which sadly so many brain tumour patients have to endure.

“Since losing Pete, our girls and I have set up Fluffy Cloud and Co. to support the work of Brain Tumour Research, raising awareness of the disease and ensuring funds for research facilities.

“Less than 20% of those diagnosed with a brain tumour survive beyond five years compared with an average of 50% across all cancers, yet  just 1% of the national spend on cancer research has been allocated to this devastating disease. Alice, Emma and I are determined to help make a difference in Pete’s memory.”

Carol Robertson, Head of Community Fundraising (South) for Brain Tumour Research, said: “For too long, brain tumours have been a neglected cancer. Stories like Peter’s remind us all that we cannot allow this desperate situation to continue.”

To make a donation in memory of Peter Barltrop, go to www.justgiving.com/fundraising/Fluffycloudandco