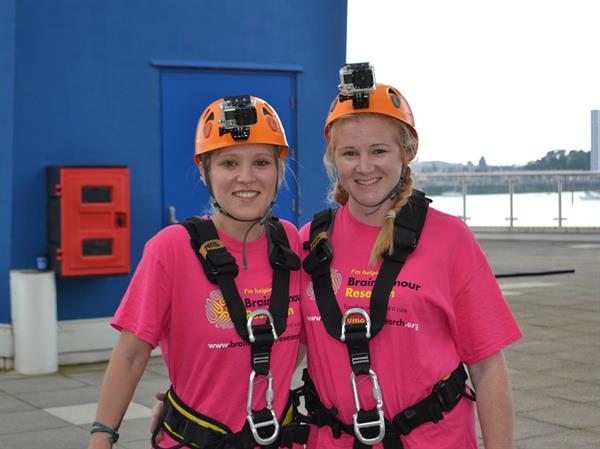 Residents from across Hampshire have abseiled the Spinnaker Tower in Portsmouth to help build a network of experts in sustainable brain tumour research.

One of those who took part, Ben Williets, 20, from Fordingbridge, was inspired to complete the challenge after his dad’s brain tumour diagnosis. Having been diagnosed in January 2015, Jon Williets’ tumour has become more aggressive and treatment options limited.

Ben, who is a student at the University of Portsmouth, said: “Despite all my father has been through, he remains in high spirits. I have rarely seen him letting his condition get him down which has been really inspiring and is part of the reason I took on the abseil. I felt both nervous and excited for the abseil and I was so proud once I had completed it. I took part in the event with my best friend, Sam, who is 20 and also a student, which was great as he gave me a lot of support.”

As the highest building in the city, the 94m Spinnaker Tower offered breath-taking views of the Solent and beyond. Many of those who joined Ben on the abseil had also been affected by brain tumours in some way, with many participating in memory of a family member or friend taken by the disease.

Gosport local Lucy Aitchison, 28, and sister-in-law, Corinne Aitchison, 31, also joined Ben on the abseil. Lucy’s cousin, Elsie, was only two when she was diagnosed with a brain tumour, an anaplastic medulloblastoma, which left her with daily physical struggles, including effects on her walking.

Lucy said: “Elsie had emergency surgery and chemotherapy. The most recent scans have shown no evidence of the tumour. Both myself and Corinne were motivated by my family’s experience to complete the abseil and raise money to help others who are suffering from the disease.”

Michelle King, a 46-year-old a teaching assistant from Emsworth, took on the challenge in memory of her sister, Theresa Avey, who died in 2011. Theresa was 29 when she was diagnosed with a grade three brain tumour in 2003 after suffering a seizure. Theresa, who worked as an engineer at Lockheed Martin, underwent surgery and radiotherapy. Sadly, the tumour became more aggressive over the following eight years and Theresa died in November 2011, aged 37.

Michelle said: “I’m not a fan of heights, so naturally I was really nervous to complete the challenge. However, it’s something I felt honoured to do and I’m so proud to have achieved. My sister, who was a keen climber, feared nothing and could never understand my fear of heights, so I’m sure she would be proud too. I hope my efforts will help raise awareness of this devastating disease and draw attention to the underfunding of research which has gone on for far too long.”

Another resident who braved the abseil was Titchfield dental nurse Samantha Eastwood, aged 29. Like others, Samantha was shocked to see the devastating impact of a brain tumour. Samantha said: “I lost a dear friend to a brain tumour not long after she was diagnosed. She was so young and had so much to live for, and for this reason I was excited to help raise money to help others touched by the disease.”

Kayleigh said: “It was amazing meeting such a varied and lovely group of people at the abseil. We’ve previously raised money for Brain Tumour Research by supporting the charity’s Wear A Hat Day campaign. Through my volunteering, I learned about the importance of research into brain tumours and how historically underfunded such research has been. This inspired me to take on the Spinnaker Tower abseil.”

Tim Green, Community Fundraising Manager at Brain Tumour Research, said: “We really appreciate the support of the those who took part in the Spinnaker Tower abseil challenge. For too long, brain tumours have been a neglected cancer and we cannot allow this desperate situation to continue. Sadly, less than 20% of those diagnosed with a brain tumour survive beyond five years compared with an average of 50% across all cancers.

“The money raised will help us in our mission to build a network of experts in sustainable research. We are funding dedicated UK Centres of Excellence where scientists are focused on improving outcomes for patients and, ultimately, finding a cure.”

To make a donation to Brain Tumour Research via the Hampshire residents’ JustGiving pages, go to: