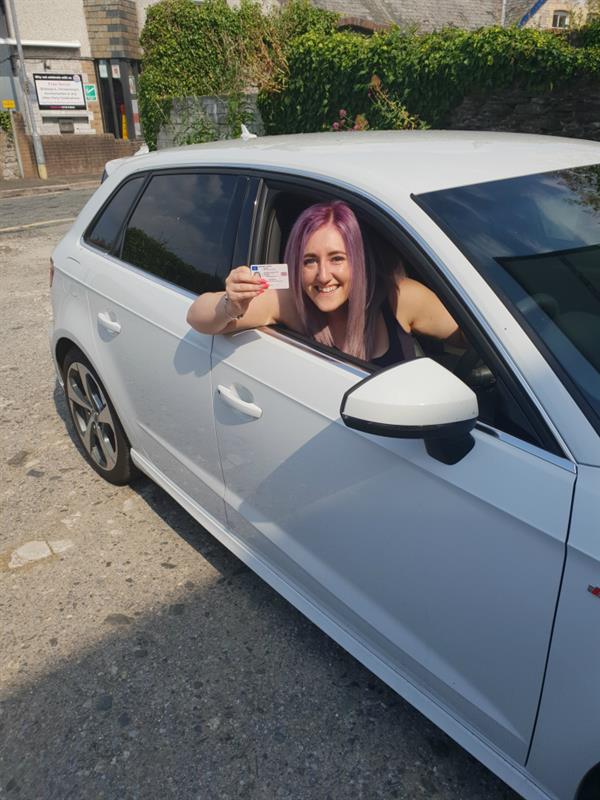 A young hairdresser who was diagnosed with a brain tumour is celebrating after being given the all clear following surgery.

And the news means that Vicki Hilborn, aged 26, can once again drive the 20 minutes to work instead of the two-hour trip involving two buses and a ferry which she had been forced to do for months following her diagnosis.

Vicki was diagnosed with a low-grade tumour a year ago after suffering from visual disturbances. She underwent surgery and has now had her fourth scan showing she is clear of the disease.

Vicki, who lives in Saltash, said: “One of the most difficult things to live with was losing my licence. I count myself fortunate in many ways, including that I have been able to go back to work. I am proud that I managed to keep working even without my driving licence although the journey from Cornwall to Devon and back to Cornwall again was very tiring and time consuming on public transport. I absolutely love my job and it’s going to take a lot more than a brain tumour to make me give up!”

Prior to being granted her licence back by DVLA, determined Vicki was leaving her house in Saltash and walking to a nearby bus stop. From there she took a bus taking her out of Cornwall and into Plymouth, Devon, before changing to a different service to get to Devonport. Vicki’s epic trip by public transport then saw her walking down the hill to catch a ferry to Torpoint and her job at Alternative Styles then back into Cornwall.

“Having your licence taken a way is such a disabling thing but I was determined to remain as independent as I could. I was lucky that my recovery after surgery was remarkably quick although I did have to have a second operation after contracting an infection in my skull. Even so, I was back in the salon six and a half weeks after that which I thought was a good effort,” said Vicki who is married to Rich.

Vicki has been advised that it is possible her tumour, a grade two glioma, will regrow. But for now, 12 months since her operation, there is no sign of the disease.

Vicki is working with the Brain Tumour Research charity to share her story. Brain tumours kill more children and adults under the age of 40 than any other cancer yet just 1% of the national spend on cancer research has been allocated to this devastating disease. The charity funds a network of Centres of Excellence, including one at the University of Plymouth, where scientists are focused on improving outcomes and, ultimately, finding a cure for brain tumours. Brain Tumour Research is campaigning to see the national spend on research into brain tumours increased to £30 - £35 million a year, in line with breast cancer and leukaemia.

Vicki added: “I hope that sharing my story will inspire others. As dreadful as a brain tumour diagnosis is, sometimes there are happy endings. At the moment I feel blessed, I am on cloud nine, back at work and loving living a normal life. I have a souvenir of the operation – a scar which runs from the top of my temple around my ear – but have no ill effects whatsoever and feel invincible.”