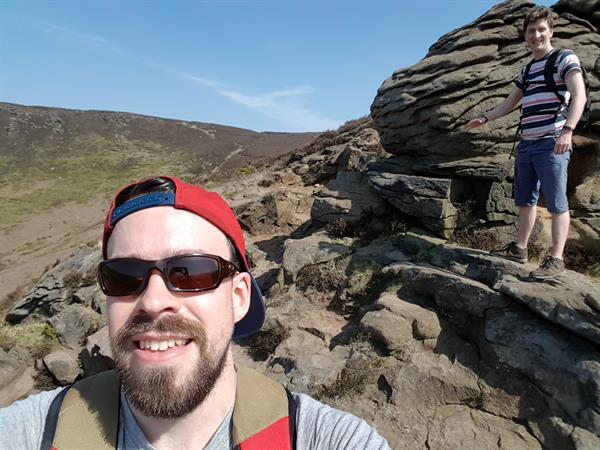 A group of friends are climbing the three highest peaks of Scotland, England and Wales within 24 hours following the brain tumour deaths of two close pals.

Philip Wilson, Scott Chiesa, Adie Laird and David Nicolson, are set to walk 23 miles and ascend over 11,000ft to raise money for the Brain Tumour Research charity. Their National Three Peaks Challenge comes following the death of Andrew Bent, aged 33, and Phil Blackmore, 31. Brain tumours kill more children and adults under the age of 40 that any other cancer, and more men under 45 than prostate cancer.

One of the inspirations behind the challenge was the death of Andy Bent from Hamilton. Andy was diagnosed with a rare Supratentorial Primitive Neuroectodermal Tumour in September 2015 at the age of 30. He proposed to his partner, Emma, two months later and underwent surgery the next day. A second operation followed after Andy’s scar became infected and he was given an eight-week course of radiotherapy. His condition stabilised but by the following Christmas, the tumour had returned and Andy had radiosurgery. In spring 2017, Andy was prescribed chemotherapy but was told soon after that any further treatment would be palliative. Andy and Emma married in August but he deteriorated rapidly and passed away in January 2018.

Scott Chiesa, a medical researcher at University College London, said: “Andy and I met at Hamilton Grammar School and were good friends right until his death. Despite everything he went through in the two years following his diagnosis, his bravery and positivity right until the end were an inspiration to all of his friends and family. It saddens me that the statistics on brain tumours are so bleak and yet such little funding is allocated to research into a cure.”

Philip Wilson, aged 32 from Coatbridge and now living in Bounds Green, North London, said: “Climbing the Three Peaks is going to be quite the challenge. Having completed the London Triathlon last year in Phil’s memory, I continue to be motivated by his can-do attitude. He ran the Berlin Marathon just a few months after his diagnosis so I can certainly get through this. It’s still hard to believe that such a healthy and physically fit guy like Phil could be killed in a matter of months by this disease.”

The team will set out on their challenge on 20th July 2018 and together they are aiming to raise over £5,000 for vital research into brain tumours. Starting in Scotland at Ben Nevis (1345m), moving onto Scafell Pike (978m) in England, and then finishing at Snowdon (1085m) in Wales, the four friends also want to raise awareness of this devastating disease.

Joe Woollcott, Community Fundraising Manager for the Brain Tumour Research charity, said: “We are extremely grateful to Philip, Scott, Adie and David for raising funds to help us find a cure. For too long, brain tumours have been a neglected cancer. Stories like Phil’s and Andy’s remind us all that we cannot allow this desperate situation to continue.”

To make a donation to the Brain Tumour Research charity via the team’s JustGiving page, go to: https://www.justgiving.com/fundraising/teamnational3peaks

For further information, please contact:
Farel Williams at the Brain Tumour Research Charity on 01908 867221 or 07592 502708 or Farel.Williams@braintumourresearch.org