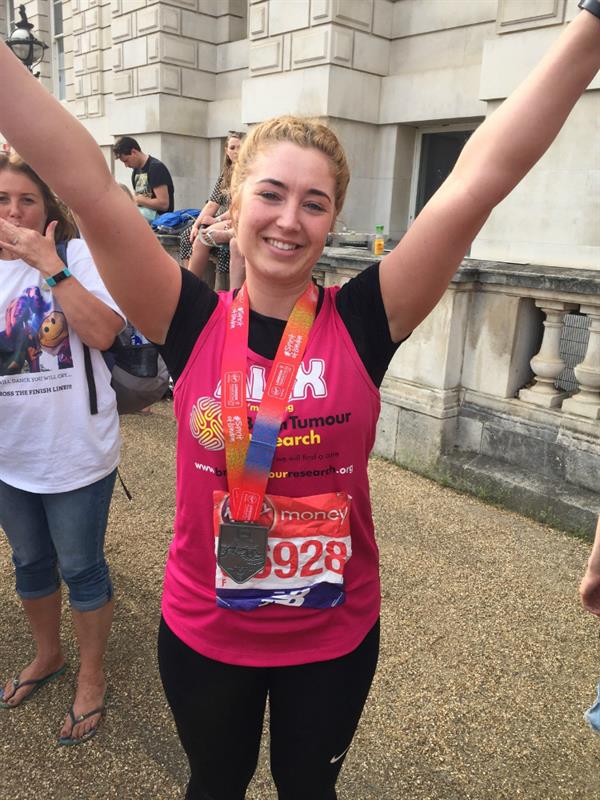 A Greenhithe woman who lost a close friend to a brain tumour and recently discovered her father, Robert Surry of Longfield, also has a brain tumour as well as lung cancer, completed the London Marathon with a time of 5.58 to raise funds to help scientists find a cure for the disease.

Alexandria Broad-Surry, 23, lives in the flat in Empire Walk, Ingress Park, Greenhithe where her friend Darel Bryan used to live before he moved to East London. Alexandria, Darel and his partner Natalie often used to go away for weekends and holidays together. Darel was a fit and healthy 33-year-old and had only recently moved when he was diagnosed with several brain tumours. Just over a year later, Darel, passed away.

Now, just over two years after losing Darel to brain cancer, Alexandria has raised more than £3,000 for the pioneering charity Brain Tumour Research which funds a network of Centres of Excellence where scientists are focused on improving outcomes for patients and, ultimately, finding a cure.

Alexandria said: “It was a big shock when Dad was diagnosed with a brain tumour too, having seen how there were so few treatment options available to Darel. Thankfully he is doing better than expected, but we will see at the next scan whether the tumour has grown. For obvious reasons, raising funds for research into brain tumours is very close to my heart and, as well as raising money, I hope my efforts will also help to raise awareness of the shocking statistics around this disease.”

Alexandria was among 40,000 runners taking part in the event which was started by The Queen from the grounds of Windsor Castle and relayed to big screens at the start line in Blackheath. It was the 38th London Marathon to take place since the first on 29th March 1981.

Michael Thelwall, Head of Community Fundraising for Brain Tumour Research, said: “Alexandria’s determination and commitment are fantastic and I hope she will provide inspiration to others whose lives have been affected by a loved one with a brain tumour.

“For too long, brain tumours have been a neglected cancer. Experiences like Darel’s remind us all that we cannot allow this desperate situation to continue. We are extremely grateful to Alexandria and offer our congratulations to everyone who took part in this year’s event to raise money for charity.”