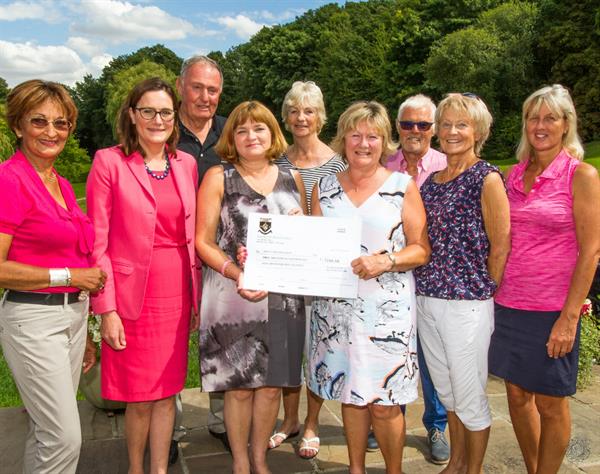 Members of a South Benfleet golf club have raised more than £3,000 to help scientists find a cure for brain tumours.

The pioneering charity Brain Tumour Research was nominated by Sue Hilton during her year as Ladies Captain at Boyce Hill Golf Club during 2016. Sue and her husband Ray lost their daughter Amanda to a brain tumour in 2010. Amanda was 39 and passed away just five months after being diagnosed with an aggressive glioblastoma multiforme (GBM) brain tumour.

Members took part in a variety of fundraising events during the year including raffles and coffee mornings, and also donned a variety of headwear for the charity’s annual Wear A Hat Day campaign.

Among guests at the club who attended a lunch to mark the end of the year of fundraising were Rebecca Harris, MP for Castle Point, and Sue Farrington Smith, Chief Executive of Brain Tumour Research, who said: “We are so grateful to everyone who has helped to raise the magnificent sum of £3,166.66. The money will fund research taking place at our Centres of Excellence where scientists are dedicated to improving outcomes for patients and, ultimately, finding a cure for brain tumours.

“We launched the charity in 2009 to raise funds and awareness to make a real difference to this underfunded cancer. Sue and Ray were among our first supporters and have been helping us ever since and we are extremely grateful to them.”

“Sadly, they are not alone in their experience as brain tumours kill more children and adults under the age of 40 than any other cancer yet just 1% of the national spend on cancer research has been allocated to this devastating disease.”

More than £18,000 has been raised for Brain Tumour Research in memory of Amanda. Her mum Sue said: “It is shocking to learn the numbers of young people who are affected by brain tumours and our hope is that the money we have raised will mean fewer people suffer in the future.”

Brain Tumour Research operates a network of Centres of Excellence where scientists are focused on finding new treatments and, eventually, a cure for brain tumours. Each day of research costs £2,740.

To make a donation to Brain Tumour Research in memory of Amanda please go to https://www.justgiving.com/fundraising/amandahilton