Gemma gets her hat on for Brain Tumour Research! 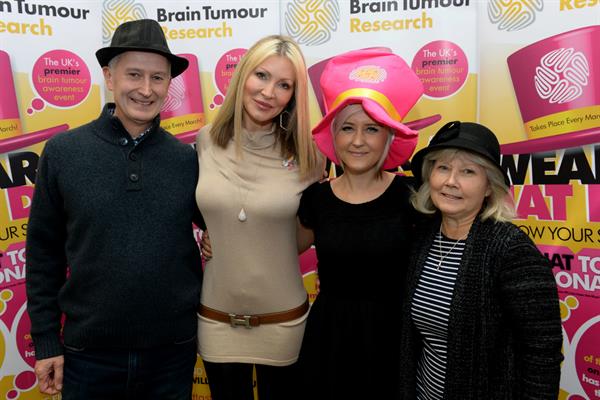 A wife and mother who was diagnosed with an incurable brain tumour has helped to launch a national fundraising campaign to find a cure for the disease.

Gemma Edgar, aged 32, from Colchester and a paediatric nurse at Colchester General until she was forced to take very early retirement due to ill health, is working with the national charity Brain Tumour Research  to support this year’s Wear A Hat Day which takes place on Thursday 29th March.

Along with her husband, Rob, and parents Andy and Barbara Relf, also from Colchester, Gemma met businesswoman, model and brain tumour survivor, Caprice Bourret at the charity’s HQ in Milton Keynes to launch the campaign on Saturday 3rd March.

Gemma, mother to Dylan, five and Noah, three, was 29 in 2014 when she was diagnosed with a brain tumour, just eight weeks after giving birth to Noah. She underwent surgery to remove as much of the aggressive and incurable grade four glioblastoma multiforme (GBM4), followed by six weeks of radiotherapy. the size of an tangerine on her 13th wedding anniversary.

Gemma, who has also had to cope with the fact that Noah has undergone surgery and treatment for eye cancer, commented: “I won’t ever be able to say I’m in remission and, in fact, I had to have further surgery back last November when the GBM4 reoccurred. I am now on chemotherapy and feeling positive. I could just hide myself away under the duvet, but I don’t want my boys to have bad memories of Mummy crying all the time.”

“I cannot stand by without doing all I can to change the chronic underfunding into brain tumour research. As a family, we are committed to helping fund vital research taking place at a network of Brain Tumour Research Centres of Excellence.”

Caprice underwent surgery to remove a low-grade brain tumour which was diagnosed a year ago and continues to be monitored by her medical team. Launching Wear A Hat Day 2018, she said: “I have been so touched by Gemma’s story and the incredible work she is doing fundraising for Brain Tumour Research. It is a sad fact that brain tumours affect so many people and that this devastating disease is indiscriminate and can affect anyone at any age – I never even used to get headaches before I was diagnosed.

“I am proud to be working with Gemma and her family and so many others to support Wear A Hat Day. I want everyone to get involved! It’s such a fun event and anyone can take part. Let’s all put our hats on and do something positive for Gemma, and support the fantastic research going on right now. I am determined to try to make a difference for the 16,000 people diagnosed with a brain tumour each year.”

Gemma said: “We are dedicated to continuing to raise awareness of brain tumours and are really proud of what we have achieved so far. We have had such wonderful support from people in and around Colchester and I hope they will once again join us by getting involved in Wear A Hat Day.”