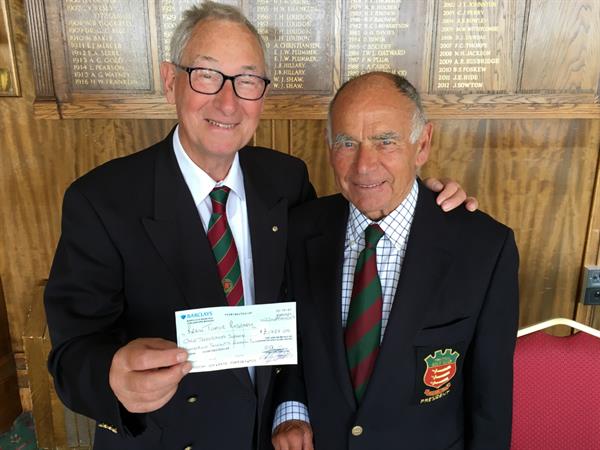 Members of Frinton Golf Club have come together to raise vital funds for research into, and awareness for, the disease that killed the captain’s daughter.

Following his daughter Sally’s brain tumour diagnosis and subsequent death in 2008, David Joshua, captain of Frinton Golf Club, chose pioneering charity Brain Tumour Research as the club’s charity of the year. David has now presented the charity with a cheque for £1,727 in Sally’s honour.

Sally Joshua was 42 when she was first diagnosed with a low-grade brain tumour in autumn 2004. The mum-of-two, who worked for Bank of America, was taken into hospital following a bad fall and a series of severe headaches, and surgeons immediately operated on the tumour. Despite a successful operation, Sally suffered from a stroke the following night leaving her temporarily unable to recognise her family. Sally, who lived in Horley, Surrey, overcame the consequences of the stroke and went on to live for another four years in relatively good health. However, in November 2008, Sally died suddenly died at home.

David, who has been captain of Frinton Golf Club since March 2017, said: “I’m so grateful to everyone at the club for getting behind me and supporting Brain Tumour Research as my charity of the year. I’m delighted that we’ve raised so much for such an important cause.

“Sally’s death was such a horrible shock. She was doing so well for four years but then all of a sudden, she passed when her husband Rafe was out on the school run. It was a really hard time for all of us, but we just had to carry on and be strong for the kids. Amy and Miles were only nine and five at the time so it was especially difficult for them to come to terms with the death of their mum. Ten years have passed now and I want to do whatever I can to help find a cure for the disease.”

From March 2017 through to March 2018, Members of the club helped to fundraise through sponsored matches, barbecues, race nights and activities during the club’s annual Golf Week.

Michael Thelwall, Head of Community Fundraising, said: “It’s been a pleasure meeting David and the rest of the members here at Frinton Golf Club. We’re extremely grateful for their donation and we appreciate David’s efforts to raise awareness of the lack of funding for research into brain tumours.”

The money raised will go to the pioneering charity Brain Tumour Research, which funds a network of dedicated Centres of Excellence where scientists are focused on improving outcomes for patients and, ultimately, finding a cure.