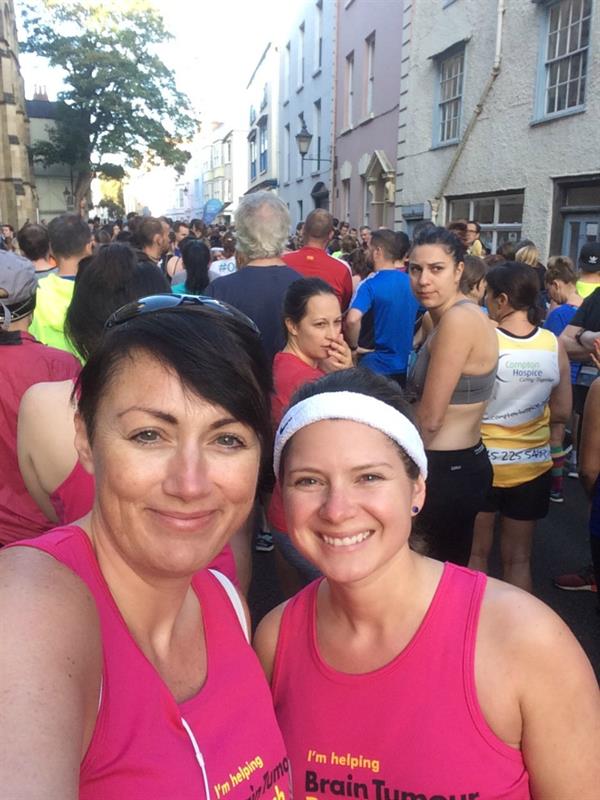 A young boy who was lost to a brain tumour, aged 11, inspired two friends and work colleagues to take on the Oxford half marathon to raise funds for research into the disease.

Danny Green of Canvey Island, was diagnosed with a grade 4 medulloblastoma brain tumour in November 2011, aged 10.  He had surgery to remove the tumour, but was left with a condition called Posterior Fossa Syndrome (PFS) which meant he was unable to communicate, move unaided, hold his head up, balance or walk.

Tragically, despite chemotherapy and radiotherapy, Danny lost his fight for life eight months after diagnosis in July 2012.  Danny was just 11.  His parents, Lisa and Chris Green, set up The Danny Green Fund, a member charity of national charity Brain Tumour Research.

Lauren Shorter, 28, who lives in Basildon and Jennifer Thorn, 44, who lives in Kelvedon near Colchester, were among thousands of runners taking part in the Oxford half marathon on 8th October.

The two women, who both work for Vitality, a health and life insurance company in London, have already exceeded their joint target of raising £1,200 for the pioneering charity Brain Tumour Research which funds a network of Centres of Excellence where scientists are focused on improving treatments for patients and finding a cure. Each day of research costs £2,740.

Lauren said: “I didn’t know Danny or his family, but heard his tragic story on the news and was shocked that there was no cure. It inspired me to help fund research into this neglected form of cancer.”

Jenny commented: “I have another reason for supporting Brain Tumour Research – my mum, Lynda Coles, also of Kelvedon, was diagnosed with a brain tumour, but fortunately this turned out to be low-grade.”

Danny’s mother, Lisa said: “Thank you Lauren and Jenny for running in memory of Danny. It is so kind of you. We are sorry to hear that Jenny’s mother has been diagnosed with a brain tumour and hope she makes a good recovery.

“It’s five years since Danny died and it seems so cruel that he is not here to enjoy life as a teenager.  He was enjoying going to school and playing football. If he were still with us, we would have been celebrating his GCSE results this summer.”

“Brain tumours are such a cruel disease and more sustainable research must be carried out if we are to prevent others from suffering as Danny did.”

Danny attended Leigh Beck Primary School where he was doing well and was very happy.

Carol Robertson, Head of Community Fundraising (South) for Brain Tumour Research, said: “We are extremely grateful to Lauren and Jennifer and everyone who has supported the charity in memory of Danny over the years. Sadly, Danny’s family are not alone in their experience. Brain tumours kill more children and adults under the age of 40 than any other cancer yet just 1% of the national spend on cancer research has been allocated to this devastating disease.”