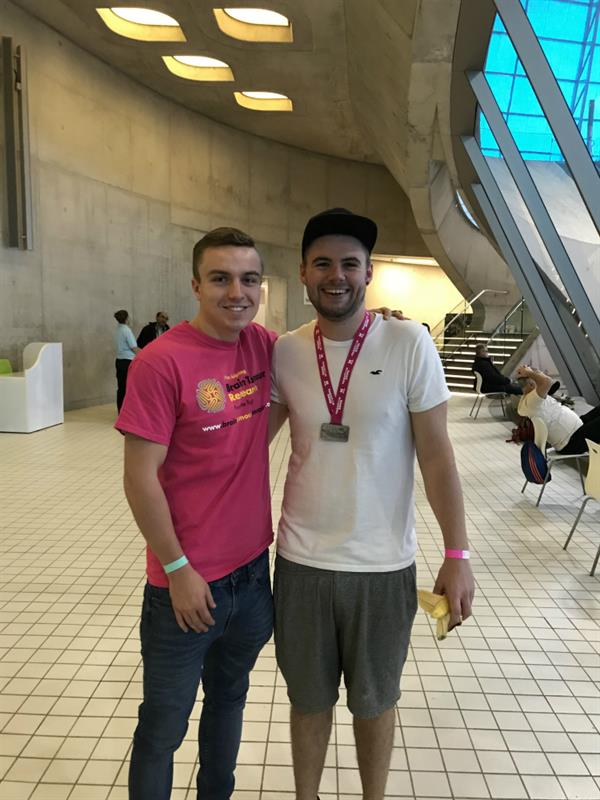 After his childhood friend was diagnosed with a brain tumour when he was 11 years old, one man took to the waters to raise funds for research into the disease.

Samuel Gunn was inspired to take part in a 10k swimathon after his friend Sam Cherry was diagnosed with a brain tumour after experiencing months of crippling migraines. After undergoing delicate surgery to remove the tumour, he had to then spend over three months in hospital recovering.

The friends Samuel and Sam, both 24, from Syston in Leicester met when they were both children and attended the local swimming club at The Cossington Street Sports Centre.

Samuel was one of 90 swimmers who competed in the challenge at the London Aquatic Centre, chose to swim in aid of pioneering charity Brain Tumour Research an organisation which funds pioneering research into brain tumours. So far, Samuel has raised over £1,300 and has set himself a target of £2,740, the amount it costs to fund a day of research.

“It was a tough race but I really enjoyed taking part. Having Sam and his girlfriend Sarah cheering me on from the sidelines was great, and finishing in eighth place was an added bonus!” said Samuel. “Over the years, I have learnt more about what Sam went through and the effect the tumour has had on his life. It is a horrible disease and I really hope my efforts will help raise awareness and draw attention to the research that needs to take place to find a cure.”

Brain tumours are indiscriminate; they can affect anyone, at any age, at any time. What’s more, they kill more children and adults under the age of 40 than any other cancer, yet just 1% of the national spend on cancer research has been allocated to this devastating disease.

Carol Robertson, Community Fundraising Manager for Brain Tumour Research said: “For too long, brain tumours have been a neglected cancer. Stories like Sam’s reminds us all that we cannot allow this desperate situation to continue. We are extremely grateful to Samuel for supporting our work and congratulate him on completing a tough race.”

To make a donation to Brain Tumour Research via Samuels’s JustGiving page.