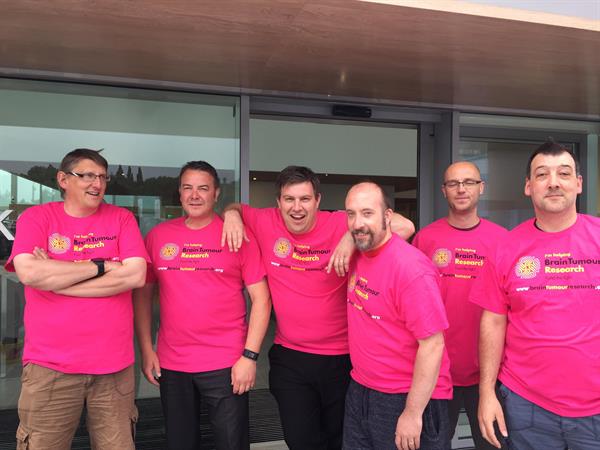 Emlyn Hughes OBE, the former captain of England and Liverpool FC, will be remembered in a fundraiser to mark the 15th anniversary of his diagnosis with a brain tumour.

His son, Emlyn Junior, is teaming up with a group of friends to take on the Yorkshire Three Peaks walking challenge in the celebrated player’s memory.

The footballing great, who was one of Britain’s most famous and inspirational sportsmen, was diagnosed with a brain tumour and underwent surgery in August 2003 and subsequently underwent radiotherapy. A second operation left him with permanent damage to his left side and he passed away at his home in Sheffield in November 2004 at the age of 57.

Emlyn Junior was 28 when his dad died. He recalled: “Dad never complained and the only talk was of how he was going to beat the odds. By the end he was still trying to be his normal positive self and one of the last things he said to me was ‘we’ll have a game of golf next week’. It was plain for anyone to see that it was never going to happen but that’s just how he was.

“The greatest thing my dad ever gave me was his name. When I introduce myself people always say ‘like the footballer?’ and I am always proud to say ‘yeah, he was my dad’.”

Dubbed the Crazy Horse because of the way he charged around the football field, Emlyn won two European Cups, an FA Cup, five championships, and was Footballer of the Year. He made his final appearance for England in 1980, the last of 62 appearances for his country with 23 as captain.

After retiring from the game he carved out a successful career in broadcasting and his distinctive high-pitched voice and sense of humour endeared him to a generation of viewers on the BBC’s A Question of Sport. He famously broke royal protocol to hug HRH Princess Anne when, as a guest on the show, she answered a question correctly. Just weeks earlier he had caused hilarity by failing to identify a photo of the princess, mistaking her for a male race jockey.

Emlyn Junior, 42, who is married with two sons and lives in Derbyshire, said: “Dad’s diagnosis with a grade four glioblastoma multiforme (GBM) came as a terrible blow to us all and I wanted to take on a challenge to raise money in his memory and to acknowledge how dreadful this disease is and to do something positive to help others who are affected.”

On 28th July together with a group of friends, Emlyn Junior will set off to tackle Yorkshire’s highest three peaks. He’s dubbed the event the “Dynamo Kebab” challenge to highlight the fact that he’s not as fit as he might be!

To make a donation to the Dynamo Kebab challenge in memory of Emlyn please go to https://www.justgiving.com/fundraising/e-hughes3