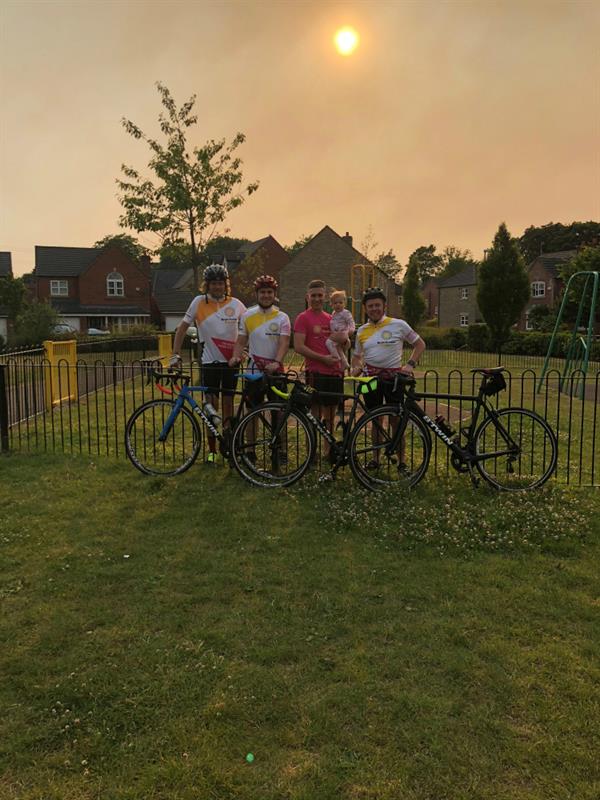 Five “middle aged and portly blokes” are to cycle 120 miles for charity inspired by their friend’s brain tumour diagnosis.

The group will be pedalling from Manchester to Blackpool – and back - and hope that this, in conjunction with other events, will bring them close to their £10,000 target for the Brain Tumour Research charity.

Next Sunday’s event (8th July) is dedicated to young dad Neil Taylor who was diagnosed with a grade three astrocytoma in February 2017. Neil, 32, who is a franchise supervisor for McDonalds in Manchester, underwent surgery followed by radiotherapy and a year of chemotherapy treatment. At the time of his diagnosis his wife Alex was expecting a baby and their daughter Annabelle is now ten months old.

Inspired by the strength and courage shown by the young family who live in Middleton, five of his friends will undertake the cycling challenge. Among them is Paul Tierney, aged 44, also from Middleton, who said: “Neil has a very close-knit family and it must be so difficult for them all. Neil and his lovely wife have shown such tremendous courage and strength through all of this and it has been an inspiration to everyone who knows them.

“It has to be said that we are five middle-aged and portly blokes so not necessarily built for road cycling but we are determined to complete the challenge we have set ourselves and to raise a total of £10,000 for research into brain tumours.”

Also riding will be Stephen, 38, and David Mellor, 40, who live in Alkrington, Jason Doherty, 38 from Boardshaw, and Nick Cooke, 45, of High Crompton. Most of the guys have known each other and Neil for at least 20 years.

Andrea Pankiw, community fundraising manager for the Brain Tumour Research charity, said: “We are extremely grateful to all of those who are taking part in this challenging cycle ride. Brain tumours kill more children and adults under the age of 40 than any other cancer yet just 1% of the national spend on cancer research has been allocated to this devastating disease.

“Stories like Neil’s remind us that brain tumours are indiscriminate, they can affect anyone at any age and that is why we are working to fund a network of sustainable Research Centres of Excellence where scientists are focused on improving outcomes for patients and, ultimately, finding a cure. We are also challenging the Government and the larger cancer charities to increase funding to bring this disease into line with other cancers such as breast and leukaemia.”

You can make a donation to Brain Tumour Research via Neil’s JustGiving page.