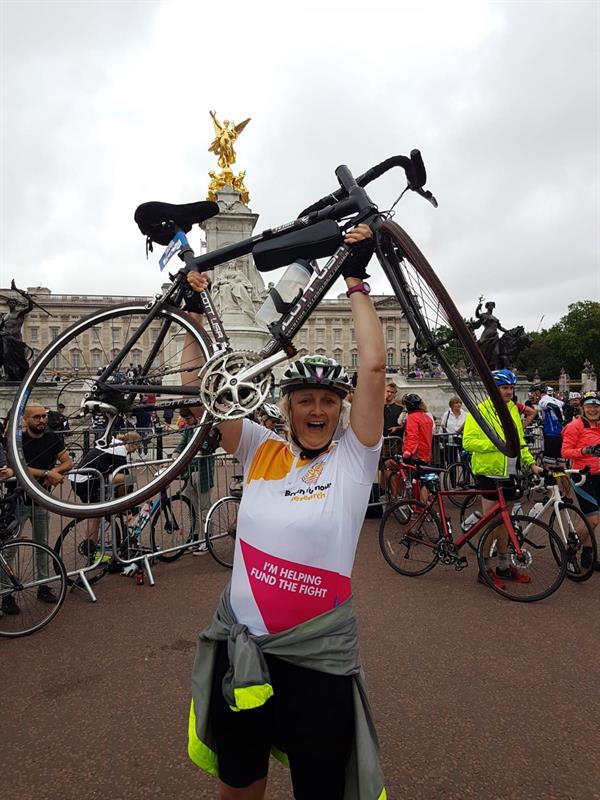 A woman from Poole who lost five loved ones to brain tumours has completed Prudential RideLondon to raise money for research into the disease.

Sarah Hopkins, 52, completed the 100-mile sportive in support of the Brain Tumour Research charity which raises funds for continuous and sustainable scientific research into brain tumours – the disease that killed Sarah’s dad and four friends.

Sarah, who works as an employability assistant at Bournemouth University, first witnessed the devastation of brain tumours when her dad, Geoff Hopkins, died six months after being diagnosed with the disease. Recently retired from his job as a sales manager in the Middle East, 61-year-old Geoff had his retirement cut short when he received the news in January 2001.

Brain tumours also claimed the lives of Sarah’s friends from the volleyball community. Angela Cowell, a former England international player and manager of England and GB Senior Women teams, died at Rowans Hospice in February 2017. Angela was diagnosed with two tumours and despite two operations, she died aged 53.

Three of Sarah’s friends have been killed by the most aggressive type of brain tumour: a glioblastoma multiforme (GBM). Linda Insley, who Sarah knew from the Speedwell Volleyball Club in Bristol, was aged 55 when she was diagnosed and the mum-of-two died just 11 months after her diagnosis. Ivor Paul, who was an integral part of Speedwell men’s team, national champions on numerous occasions, also died following a GBM diagnosis at 61; and Curtis Palmer, a policeman from Poole, who was diagnosed with a GBM and died aged only 28.

Sarah said: “I was so nervous ahead of RideLondon but I’m thrilled to have done it. Raising money for research into brain tumours means so much to me and I’m proud to have completed the event in memory of my friends and my dear Dad. The event was 17 years to the day Dad passed, which made it all the more emotional for me. I’ve fundraised over £1,400 so far and I hope to be able to add to my total in the coming days.”

Sarah was among 24 cyclists supporting the Brain Tumour Research charity at Prudential RideLondon, described as “the world’s greatest festival of cycling.” Some 25,000 took to the roads for the RideLondon 100-mile sportive which set off from the Queen Elizabeth Olympic Park in east London on Sunday 29th July before heading through the capital and out into the Surrey countryside and finishing on The Mall.

Emma Cronin, Community Fundraising Manager for the Brain Tumour Research charity, said: “Brain tumours kill more children and adults under the age of 40 than any other cancer, yet just 1% of the national spend on cancer research has been allocated to this devasting disease.

“For too long, brain tumours have been a neglected cancer. The deaths of Geoff, Linda, Curtis, Angela and Ivor remind us all that we cannot allow this desperate situation to continue. We are extremely grateful to Sarah and congratulate her on completing the event.”

To make a donation to the Brain Tumour Research charity via Sarah’s JustGiving page, go to https://www.justgiving.com/fundraising/sarah-hopkins9