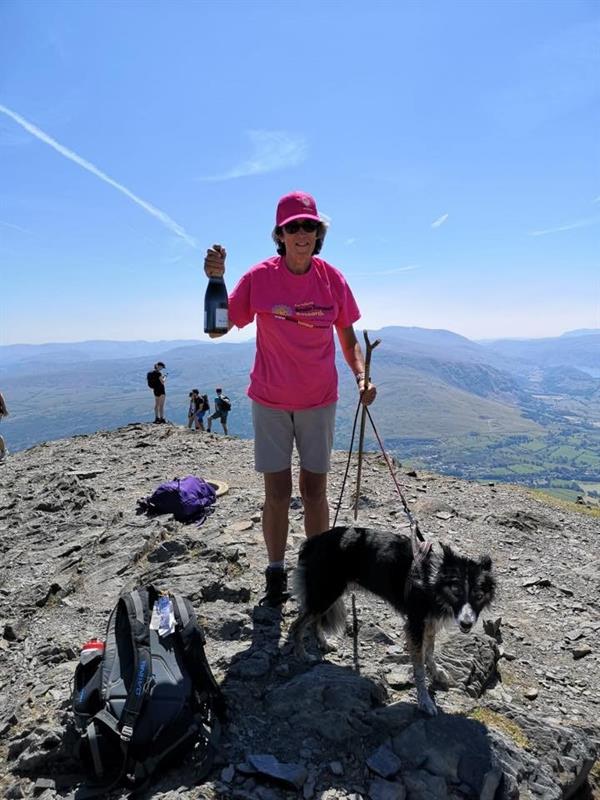 A local land drainage consultant and business-owner has climbed Blencathra for the Brain Tumour Research charity, motivated by her own diagnosis with the disease.

When Jenny Lambert, from Fimber near Driffield, was diagnosed with a brain tumour, her dream of climbing Blencathra in the Lake District was suddenly put on hold. Jenny’s diagnosis came following a series of vision problems and although doctors initially suspected a stroke, the cause was a grade four brain tumour. Jenny then underwent emergency surgery to remove the majority of the tumour followed by radiotherapy and chemotherapy. Now, just 18 months on from her diagnosis and aged 61, Jenny has regained her strength and conquered Blencathra.

Jenny, who owns Land Drainage Consultancy Ltd with her husband Ray Lambert, said: “Blencathra towers over our small holiday cottage and to be able to look at it now and think, ‘I’ve climbed that’, gives me a huge sense of achievement.

“Despite temperatures hitting 30 degrees, 20 of us and eight dogs reached the top. It was a severe challenge but it was so satisfying and enjoyable to achieve it. We all celebrated with champagne at the top!”

Words of encouragement from world-renowned mountaineer Doug Scott CBE, who coincidentally lives next door to the Lambert’s holiday cottage in the Lake District, also spurred Jenny on throughout her challenge. Doug is best known for his 1975 Everest expedition in which he and Dougal Haston became the first to ascend the south-west face of the world’s highest peak. His greatest adventure, however, came two years later when he reached the summit of the Ogre with Chris Bonnington but broke both legs during the subsequent descent and had to crawl to base camp.

Blencathra, also known as Saddleback, stands at 2,848ft tall, making it the fifth highest mountain in the Lake District.

Jenny continued: “Discovering I had a brain tumour was devastating but the excellent care I’ve received at Hull Royal Infirmary has spurred me on to give something back. More research is needed into brain tumours and I’m anxious to help improve the outcomes for people going through the same experience as I have. I’ve raised over £3,000 so far but I want to continue doing whatever I can.”

Luke and Ben Lambert, Jenny’s sons, will add to her total in September by completing the Great North Run. Jenny added: “The cause is also extremely close to my son’s hearts and I’m so proud that they are fundraising too.”

Carol Robertson, Head of Community Fundraising at the Brain Tumour Research charity, said: “Jenny’s mountain climb is a tremendous achievement and we are extremely grateful to her for fundraising. The money raised will help us in our mission to build a network of experts in sustainable research. We are funding dedicated UK Centres of Excellence where scientists are focused on improving outcomes for patients and, ultimately, finding a cure.”

Make a donation to the Brain Tumour Research charity via Jenny’s JustGiving page.

For further information, please contact:
Farel Williams at the Brain Tumour Research charity on 01908 867221 or 07592 502708 or Farel.Williams@braintumourresearch.org