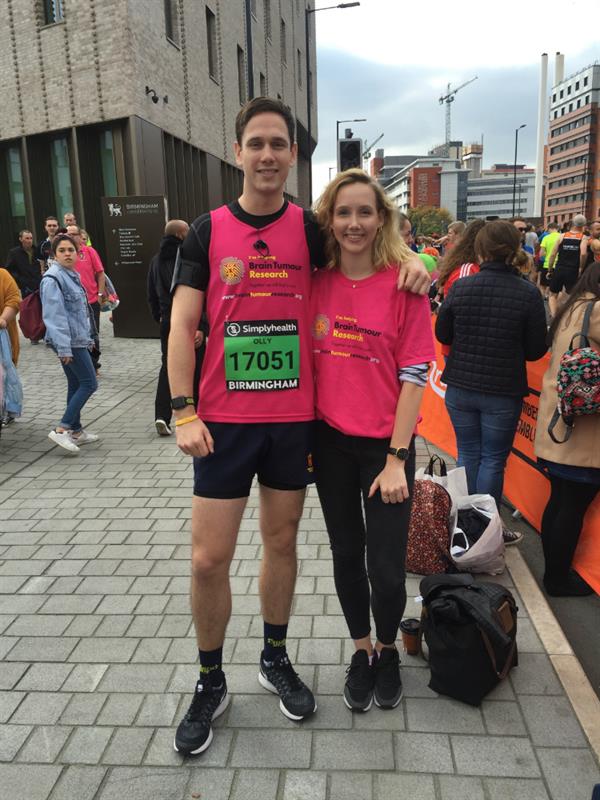 A brother and sister whose father is living with an aggressive brain tumour are taking on the London Marathon to raise funds for research into the disease.

Olly and Beth George have already raised more than £5,000 and are hoping to reach a target of £7,000 for the pioneering charity Brain Tumour Research which funds a network of Centres of Excellence where scientists are focused on improving outcomes for patients and, ultimately, finding a cure.

Their dad, Mark George, 58, was diagnosed with an incurable grade four Glioblastoma Multiforme (GBM) brain tumour in 2016. He has had two operations plus radiotherapy and chemotherapy to try to prevent the mass from growing. Otherwise fit and healthy, Mark, who worked as Facilities Manager for VINCI Facilities at Princes Royal University Hospital in Bromley, was a keen road cyclist. A scan revealed the tumour after he was twice taken ill while out on his bike and experiencing loss of sensation down one arm.

Olly, 27, who is area sales manager for global engineering manufacturer Gardner Denver and lives in Solihull, said: “I have found that running has become an essential way of coping with dad’s diagnosis and want to use this to make some good out of a truly horrific situation. When I run, I get that sense of freedom dad speaks about when he rides his bike and I now run as part of my method of coping with his cancer.

“I’ve had some amazing runs where I’ve beaten my personal best and felt on top of the world. I’ve had runs where I’m angry, furious at the unfair cards we’ve been dealt and runs that end in a complete meltdown, overcome with emotion.

“I don’t think I could have broken down so many barriers to reach any kind of emotional acceptance or the ability to adapt to the changes to my life without running. From such a simple exercise, I’ve already gained so much.”

Beth, 24, works for West End Producer Sonia Friedman, as a production assistant and has worked on shows including Harry Potter and the Cursed Child, Dreamgirls, and Funny Girl.

Beth, had to move back to the family home in Rochester, Kent with her parents Mark and Angela when her dad was diagnosed to help with care and support. She said: “I’m taking part with Olly as I want to raise as much attention and money as possible. While Olly is buzzing, I’m terrified but we both hope that we will be able to cross the finish line together. If dad can endure two rounds of brain surgery, all the treatment and darkness that cancer brings with it, then the least we can endure is to run 26.2 miles.”

The brother and sister duo will be pounding the streets of the capital on Sunday 22nd April as they take part in the marathon, which is the world’s most famous running event.

“For too long, brain tumours have been a neglected cancer. Experiences like this family’s reminds us all that we cannot allow this desperate situation to continue. We are extremely grateful to Olly and Beth for their support and are appealing for runners who have a ballot place for the marathon to join them on Team Brain Tumour Research by nominating us as their chosen charity for 2018. Together we will find a cure.”

To make a donation to Brain Tumour Research via the family’s JustGiving page go to https://www.justgiving.com/fundraising/marksmatter