Father lost to brain tumour is remembered at Centre of Excellence 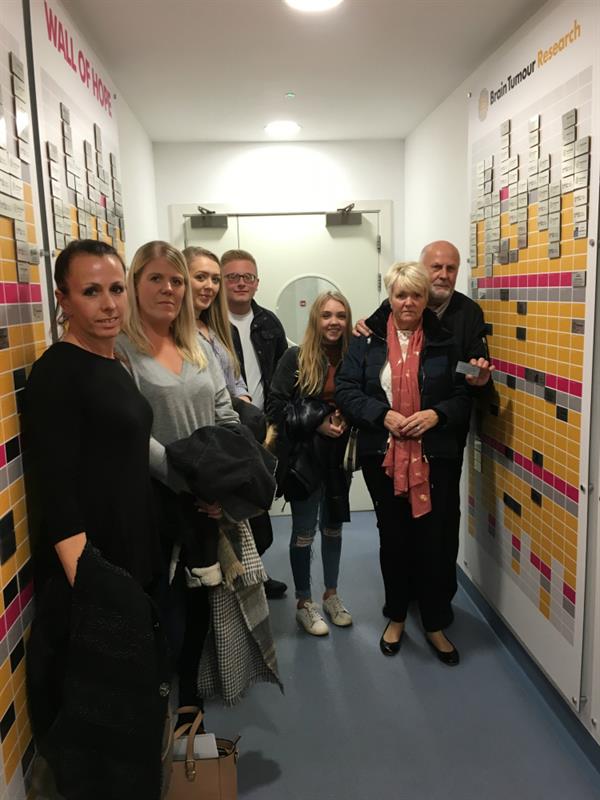 A businessman and father-of-two who died from a brain tumour has been remembered at a research centre where scientists are focused on finding a cure for the disease.

Gary Phillips, from Benfleet, Essex, was 44 when he died in January. Following his diagnosis and together with family and friends, he started fundraising for pioneering immunotherapy which was not available through the NHS. The money has been donated to national charity Brain Tumour Research as Gary sadly died before he could undergo treatment.

Gary’s parents Dave and Dianne Phillips and other close relatives travelled to London on Wednesday (11th October) to place a tile on the Wall of Hope at the Brain Tumour Research Centre of Excellence at Queen Mary University of London where scientists are focused on improving treatments and patients and, ultimately, finding a cure for brain tumours. Each tile represents the £2,740 it costs to fund a day of research.

Dave said: “We were fundraising in the hope that Gary would be treated but, sadly, this was not the case. It is comforting to think that now the money will be used to fund research into this dreadful disease. It is too late for us but we hope it will help others.”

Gary, who left two children, Alex, 19, and Leah, 17, ran air conditioning company Phillips Refrigeration which was based in Clarence Close, Benfleet. He was born in Pitsea where he attended St Margaret’s Primary School before moving to Benfleet where he was a student at King John School.

The family was given a tour of the lab where scientists, led by Professor Silvia Marino, are researching the causes of glioblastoma multiforme (GBM), the most aggressive and common type of brain tumour.

Carol Robertson, Head of Community Fundraising for Brain Tumour Research, said: “We are extremely grateful to Gary’s family for their support. Sadly they are not alone as brain tumours kill more children and adults under the age of 40 than any other cancer … yet just 1% of the national spend on cancer research has been allocated to this devastating disease.”

Brain Tumour Research is campaigning to increase the national spend on research into cancer from £30million per year – just one per cent of the national budget for cancer research – to £35million.

To make a donation to Brain Tumour Research go to https://www.braintumourresearch.org/donation/donate-now