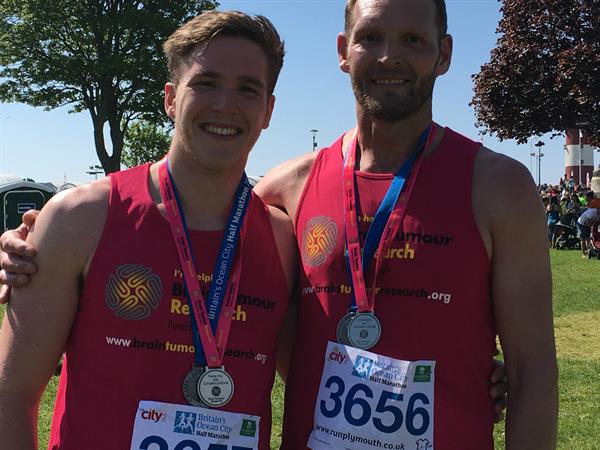 A father and son from Plymstock have completed the Plymouth Half Marathon to raise funds for research into the disease which killed their father-in-law and grandfather.

Barry, a retired business owner, also from Plymouth, was diagnosed with a glioblastoma multiforme (GBM), a highly aggressive type of brain tumour, at the age of 67 and given six weeks to live. Doctors attempted to operate on the tumour and extend Barry’s life by 18 months but sadly surgery was unsuccessful and he died four months later, leaving behind his wife Kathy, two children and two grandchildren.

Jack, who is an electrical engineer at Plessey Semiconductors Ltd In Plymouth, said: “My grandad died 10 years ago this July and he will always remain my role model. He was a truly amazing man and I’m so pleased that Dad and I have completed this challenge in his memory.”

“After a delayed start, Jack and I ran together and kept each other going in the heat,” added Nick, a self-employed floor-layer. “Research into this disease is vital and if anyone would like to make a donation to help us raise funds, we would really appreciate it.”

Brain tumours kill more children and adults under the age of 40 than any other cancer and less than 20% of those diagnosed with a brain tumour survive beyond five years compared with an average of 50% across all cancers, yet just 1% of the national spend on cancer research has been allocated to this devastating disease.

Emma Cronin, Community Fundraiser for Brain Tumour Research, said: “Congratulations to Nick and Jack for this tremendous achievement. We are extremely grateful for their support. Stories like Barry’s remind us all that we cannot allow this desperate situation to continue.

“The money Nick and Jack raised will help us in our mission to build a network of experts in sustainable research. We are funding dedicated Centres of Excellence – including one at the University of Plymouth – where scientists are focused on improving outcomes for patients and, ultimately, finding a cure.”