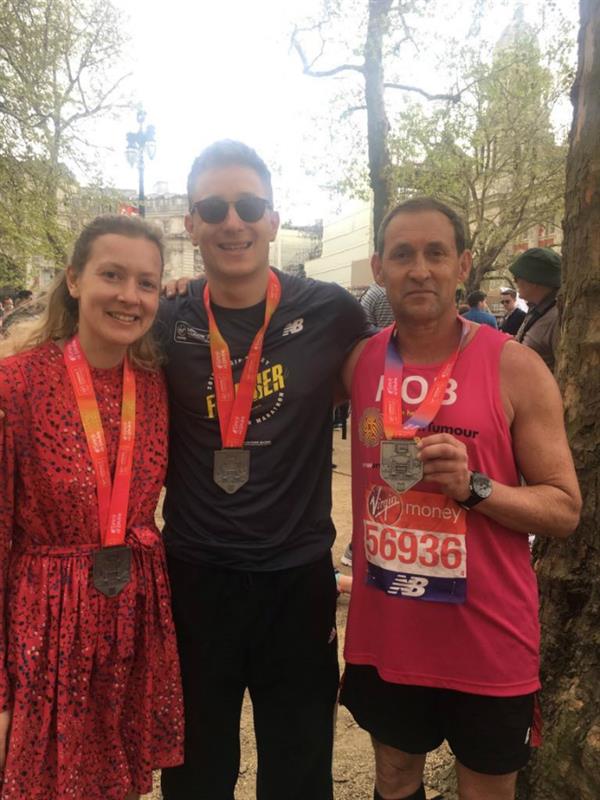 Three members of one Gressenhall family completed the London Marathon to raise funds to help scientists find a cure for the disease.

Brian Cross was a well-respected local businessman, entrepreneur and former mayor until he was diagnosed with a lymphoma which, because it was on the brainstem, was declared inoperable. Despite radiotherapy, and chemotherapy, Brian passed away just nine months after his diagnosis, aged 62, leaving his wife, Sally, and family heart-broken. In his memory they set up The Brian Cross Memorial Trust to raise funds for research into brain tumours and have already raised more than £840,000.

for the pioneering charity Brain Tumour Research which funds a network of Centres of Excellence where scientists are focused on improving outcomes for patients and, ultimately, finding a cure.  They are expecting the final total to be £15,000. Tom finished in a time of 3.48, Rosie in 4.33 and Rob 5.23.

In 2015, the Brian Cross Memorial Trust donated £120,000 to fund a research nurse over a three-year period at Brain Tumour Research’s Centre of Excellence within Imperial College, London.

Rosie said: “‘After completing the Berlin marathon, I said to myself, ‘never again’ but when the opportunity came to run the iconic London marathon with two of the people I love most in the world, I knew I had to dust off my trainers.

“Once again, we have received the most phenomenal support from our friends and family and even people we have never met before. Our dream is that no one should experience the utter helplessness that we did when Dad was diagnosed with a brain tumour. We dearly hope our marathon effort can take us one step closer to the ultimate goal of finding a cure.  Thank you to everyone for helping us raise awareness and vital funds for such an underfunded and cruel disease, you have no idea how much it means to us and the brain tumour community."

Tom said of his experience: “It was such a roller-coaster of emotion. Everyone in the crowd gave me a huge buzz, but then I would see people running in memory of loved ones with photos on the back of their running vests and it would make me think of Dad and everyone suffering with brain tumours. There was such a feeling of solidarity among the runners and the spectators – it was incredible and so special.”

Rob commented: “The heat made it very difficult, but it was such a fantastic experience.”

Rosie, Tom and Rob were among 40,000 runners taking part in the event which was started by The Queen from the grounds of Windsor Castle and relayed to big screens at the start line in Blackheath. It was the 38th London Marathon to take place since the first on 29th March 1981.

Michael Thelwall, Head of Community Fundraising for Brain Tumour Research, said: “Rosie, Tom and Rob’s determination and commitment are fantastic and I hope their story will provide inspiration to others whose lives have been affected by a brain tumour.

“Less than 20% of brain tumour patients survive beyond five years compared with an average of 50% across all cancers – yet just 1% of the national spend on cancer research has been allocated to this devastating disease.

“For too long, brain tumours have been a neglected cancer. Experiences like Brian’s remind us all that we cannot allow this desperate situation to continue. We are extremely grateful to his family and offer our congratulations to everyone who took part in this year’s event to raise money for charity.”