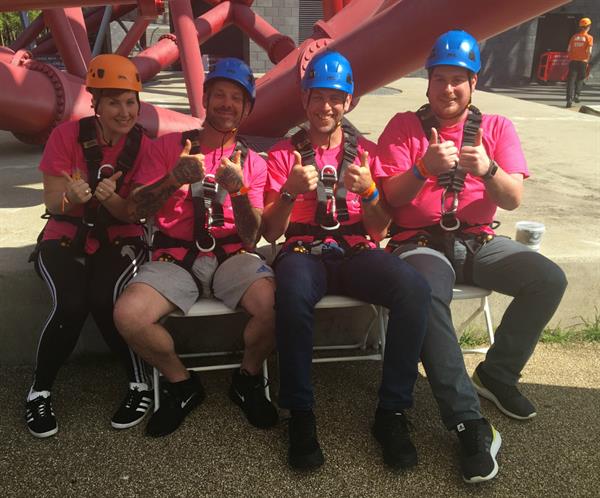 Marking the one-year anniversary of the death of Rachel Bridger, who died the day after being diagnosed with a brain tumour, family and friends have abseiled the UK’s tallest sculpture to raise over £2,000 for Brain Tumour Research.

Gareth Bridger and Stuart Brown, Rachel’s husband and brother, took on the challenge of abseiling down the ArcelorMittal Orbit on 19th May with two of Rachel’s friends, Laura Dabbs, from Northchapel, and Simon Greet, from Midhurst. The ArcelorMittal Orbit stands at 114.5 metres tall, in London’s Queen Elizabeth Park and was a landmark for London’s 2012 Olympic Games.

Rachel, age 36, from Bognor Regis, began complaining about painful headaches in March 2017. In May 2017, Rachel experienced two seizures, one of which sent her into a coma and resulted in her being put on life support. It was only then that Rachel was diagnosed with a glioblastoma – a highly aggressive brain tumour – and, tragically, the next day Rachel passed away. Rachel, who worked as a healthcare assistant at Petworth Cottage Nursing home, left behind her two young children Ollie and Lily, alongside her husband.

Gareth said: “It was a big challenge to complete the abseil but something myself, Stuart, Laura and Simon were honoured to do for this important cause. We wanted to raise money for Brain Tumour Research with the hope that other people will not have to go through what Rachel did. It is only by raising funds into the research into brain tumours that there is hope of a cure. Ultimately, it would be incredible if, when my kids are adults, there is a cure to this awful disease.”

Laura, who is 28, said: “It was so awful to see Rachel and her family suffer, and there are so many other families that have to go through the same. Rachel was such an amazing friend and her loss was truly devastating. I was inspired to raise funds for Brain Tumour Research to prevent others suffering the way that Rachel and her family did. The abseil was a huge success and it was great to see so many people supporting us and raising money for this great charity.”

Janice Wright, Community Fundraising Manager at Brain Tumour Research, said: “Brain tumours are indiscriminate; they can affect anyone, at any age, at any time. What’s more, they kill more children and adults under the age of 40 than any other cancer – and they kill more women under 35 than breast cancer – yet just 1% of the national spend on cancer research has been allocated to this fight devastating disease.

“We are extremely grateful to Laura, Gareth, Stuart and Simon, and are pleased they had such a successful event. We hope they have inspired others to consider holding their own events, helping us to spread the word about this terrible disease.”