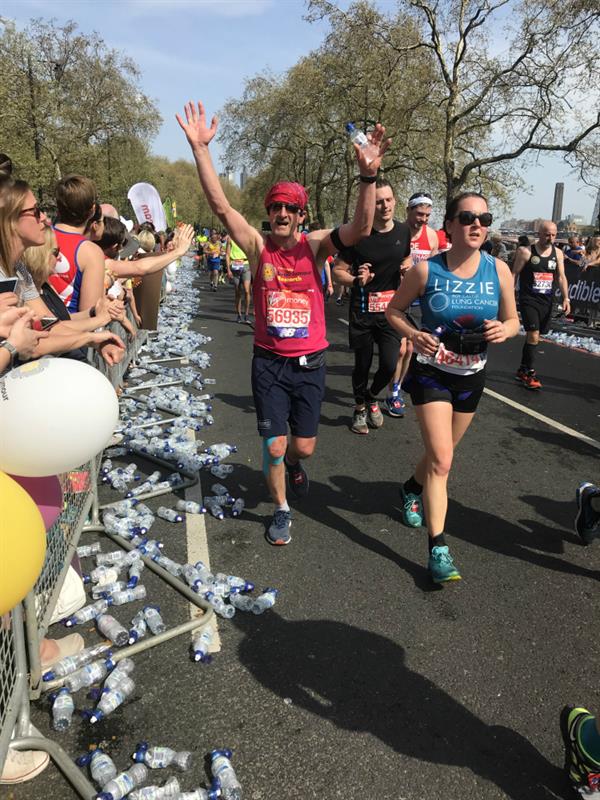 A businessman who lost his best friend to a brain tumour – and whose mum was also affected by the disease -  has completed the London Marathon to raise funds to help find a cure.

Joining tens of thousands of runners, Bob Gearing, aged 53, from Eastbourne, was inspired to take part in the world’s biggest running event on Sunday 22nd April for the charity Brain Tumour Research.

After enduring months of headaches, confusion, balance issues and memory loss, Bob’s best friend Trevor Morris, also from Eastbourne, was eventually diagnosed in September 2011 with a grade four glioblastoma multiforme (GBM), a very aggressive type of tumour.  Undergoing two operations and chemotherapy, Trevor fought bravely to battle the growth of the tumour, however the tumour gained control and he died in October 2013 with his wife Sharon and family around him. He was 53 years old.

Having fought off breast cancer just six years earlier, Bob’s mum Rita, now 82, was diagnosed with a brain tumour in early 1984 after experiencing issues with her balance and an optician noticing something during a routine eye exam. Unlike Trevor’s tumour, Rita’s was categorised as low-grade and was surgically removed. She has since made a good recovery.

Bob said: “Completing the London Marathon is such a personal achievement for me. It was a huge challenge but I’ve done it! There is little known about this disease, so it’s important to me to do what I can and help raise funds for research. Knowing I’ve raised over £6,000 so far for Brain Tumour Research is such a great feeling.

“Trevor was the strongest person I knew, funny, kind and generous. Successful in so many ways. We all miss him and I know he would have been full of encouragement today in urging me to just keep running.”

Bob was one of 40,000 runners taking part in the event which was started by The Queen from the grounds of Windsor Castle. It was the 38th London Marathon to take place since the first on 29th March 1981.

Tim Green, Community Fundraising Manager for Brain Tumour Research, said: “Brain tumours kill more children and adults under the age of 40 than any other cancer, yet just 1% of the national spend on cancer research has been allocated to this devastating disease.

“For too long, brain tumours have been a neglected cancer. Stories like Trevor’s and Rita’s remind us all that we cannot allow this desperate situation to continue. We are extremely grateful for Bob’s support and offer our congratulations to everyone who took part in this year’s event to raise money for charity.”