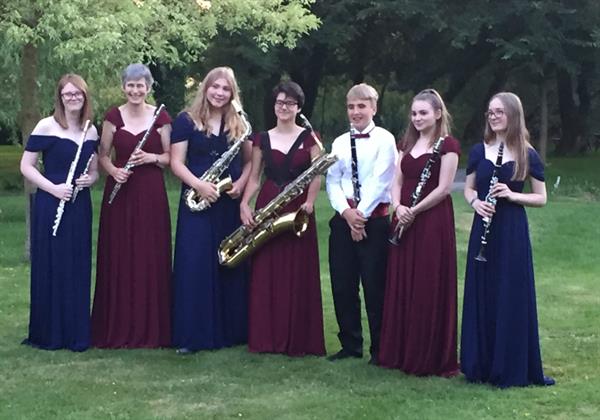 A wind band from Durrington Walls has joined a national campaign to raise vital funds for research into brain tumours.

A chamber group, comprised almost entirely of children aged 13 to 17 years old, from The Durrington Walls Wind Band, hosted a Summer Serenade as part of the Brain Tumour Research charity’s annual Do Lunch campaign. The group, known as Die Kleine Kapelle, performed to an invited audience and hosted a special supper in aid of the charity.

Peter Eve, who manages the wind band, decided to support the Brain Tumour Research charity after witnessing Katie Chapman, a member of the band, lose her mum to the disease when she was just 10-years-old. Peter, aged 77, from Salisbury, said: “It was an awful time for Katie when her mum Lorraine died. Music helped her through the trauma of losing her mum and we’ve been supporting her ever since. ‘Doing lunch’ was a fun and easy way to come together and raise money for an important cause.”

Lorraine Chapman was diagnosed with a glioma in July 2010 and initially told that her tumour was low-grade. Some months later, however, it became apparent that Lorraine in fact had a glioblastoma multiforme, a highly aggressive and life-limiting type of brain tumour. The teaching assistant and mum-of-two from Durrington outlived her original prognosis of three months but tragically died in February 2013, aged 45.

Peter has also witnessed how the disease has affected band-member Claire Button, an army major who was diagnosed with a grade two oligodendroglioma in 2008 after she was taken ill at Camp Bastion in Afghanistan. Claire’s tumour was then re-diagnosed in 2010 as grade 3 and she underwent chemotherapy and surgery. The tumour has since grown again and she is currently being treated with further chemotherapy.

The wind band, which was formed in September 2005 to provide continuity of musical opportunity for children, has raised over £700 for the charity through its Do Lunch activity.

The national campaign urges people to take part by hosting a summer get-together which could be a formal event at home, a BBQ bonanza, a perfect picnic or a three-course luncheon party. Money raised will go towards helping the Brain Tumour Research charity sustain long-term, life-saving research at its network of world-class research centres in the UK.

Tim Green, Community Fundraising Manager for Brain Tumour Research, said: “We are encouraging people to set a target of £150 and then aim to smash it. The Durrington Walls Wind Band’s Summer Serenade is a perfect example of how friends and family can come together and Do Lunch for a great cause. We are so grateful to Peter for his ongoing support and for helping to raise awareness of this devastating disease.”

To take part in Do Lunch! and to find out more go to: www.braintumourresearch.org/DoLunch