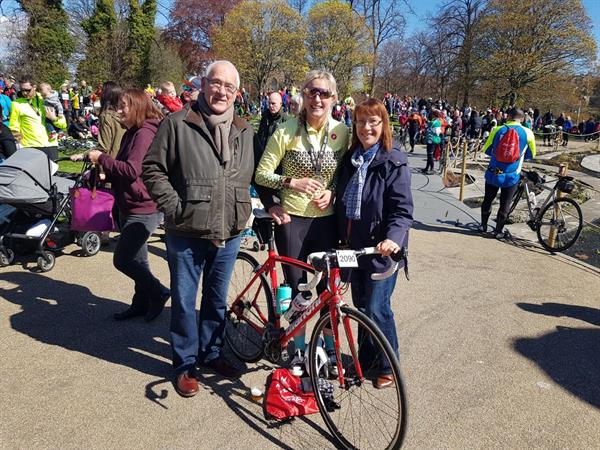 A woman from Aberdeen is dedicating a 100-mile cycle challenge to her father who has been diagnosed with a brain tumour.

Aimee Clark, 33, is taking part in the annual Prudential RideLondon to raise funds for the Brain Tumour Research charity after seeing her dad, Ronald Clark, suffer from the disease.

After retiring as a civil servant for the RAF in Lossiemouth, where he worked for 20 years, Ronald was visiting family in Australia in October 2017 when he was struck down with severe facial pain. Ronald had experienced the pain five years previously and been diagnosed with neuralgia but this time, the pain coincided with losing his balance and struggling to walk. An urgent MRI scan in Perth revealed he had a low-grade acoustic neuroma. The 65-year-old returned home immediately to Elgin, in Moray, and within six weeks he underwent surgery at Aberdeen Hospital. Surgeons successfully removed 90% of the tumour but Ronald has now lost his hearing in one ear and will have to go for regular scans.

Aimee, who works for Nuffield Health as a physiotherapist, said: “I’m so relieved my Dad has beaten the odds and recovered this quickly, however I’m aware that for the majority of people diagnosed with this disease, the outcome is rarely this positive.

“It’s important to me to keep spreading the news about this awful disease. I was shocked to learn that brain tumours kill more children and adults under the age of 40 than any other cancer and yet just 1% of the national spend on cancer research is allocated to this devastating disease. My mission is to complete RideLondon and raise vital funds for research and also to inspire others to fundraise too.”

Aiming to raise at least £500 for the charity, Aimee is among 24 cyclists supporting the charity by taking part in Prudential RideLondon, described as “the world’s greatest festival of cycling.” Some 25,000 amateurs are expected for the RideLondon-Surrey 100-mile sportive which will set off from the Queen Elizabeth Olympic Park in east London on Sunday 29th July before heading through the capital and out into the Surrey countryside and returning to the finish on The Mall.

Joe Woollcott, Community Fundraising Manager for the Brain Tumour Research charity, said: “We are extremely grateful to Aimee for her support and wish her all the best for the race. For too long, brain tumours have been a neglected cancer and we cannot allow this desperate situation to continue.”

To make a donation to Brain Tumour Research via Aimee’s JustGiving page, go to https://www.justgiving.com/fundraising/aimee-clark13