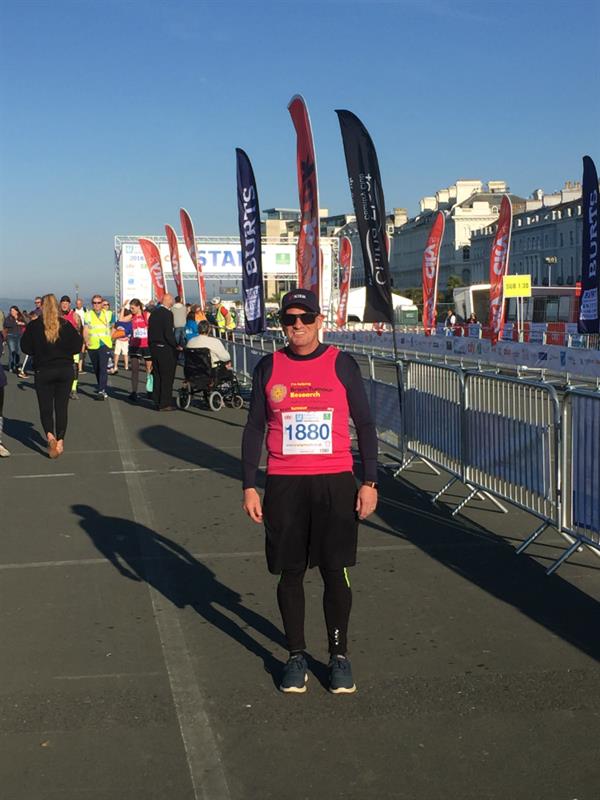 A dad-of-three from Torquay has overcome a hip condition and completed the Plymouth Half Marathon to raise money for pioneering charity Brain Tumour Research.

Spurred on by the brain tumour diagnosis of his brother-in-law, Jon Woodmore was determined to run the 13.1-mile course to raise awareness and funds for research into the disease. Despite having Perthes Disease – a hip condition that leads to restricted movement and pain – and no running experience, Jon pushed through to the finish line.

His challenge was inspired by Keith Harvey who was diagnosed with an aggressive grade four brain tumour in January 2018 following a series of seizures. Keith, 49, had surgery immediately and has since undergone radiotherapy and chemotherapy. Keith is now awaiting a prognosis.

Jon, who works as an Aftercare Manager at Kier Group, said: “Running the half marathon has been such an achievement for me. Without a doubt, it was Keith and his family’s strength that motivated me. Keith’s illness has been gruelling but they’ve not let it break them. I thought if they can get through that, then I can certainly get through a half marathon and raise some money for more research into the disease.

“While I have known people who have brain tumours, I didn’t fully appreciate that brain tumours are a type of cancer, and I believe this is due the lack of Government funding and public awareness. It was only when Keith was diagnosed that my eyes were opened. I hope that by completing this half marathon, I can at least bring a little more awareness to this indiscriminate and unforgiving disease.”

The annual half marathon saw runners proceed through the city centre towards Plymstock and Elburton and back round to finish at the Hoe. Jon joined thousands of runners on the track and was greeted at the finish line by Keith, Keith’s wife Michelle, and their kids Daniel, Jennifer and Isobel.

Brain tumours kill more children and adults under the age of 40 than any other cancer –and more men under 45 than prostate cancer – yet just 1% of the national spend on cancer research has been allocated to this devastating disease.

Emma Cronin, Community Fundraiser for Brain Tumour Research, said: “Congratulations to Jon for his tremendous achievement and we are extremely grateful for his support. Stories like Keith’s remind us all that we cannot allow this desperate situation to continue.

“The money Jon raised will will help us in our mission to build a network of experts in sustainable research. We are funding dedicated Centres of Excellence – including one at the University of Plymouth – where scientists are focused on improving outcomes for patients and, ultimately, finding a cure.”