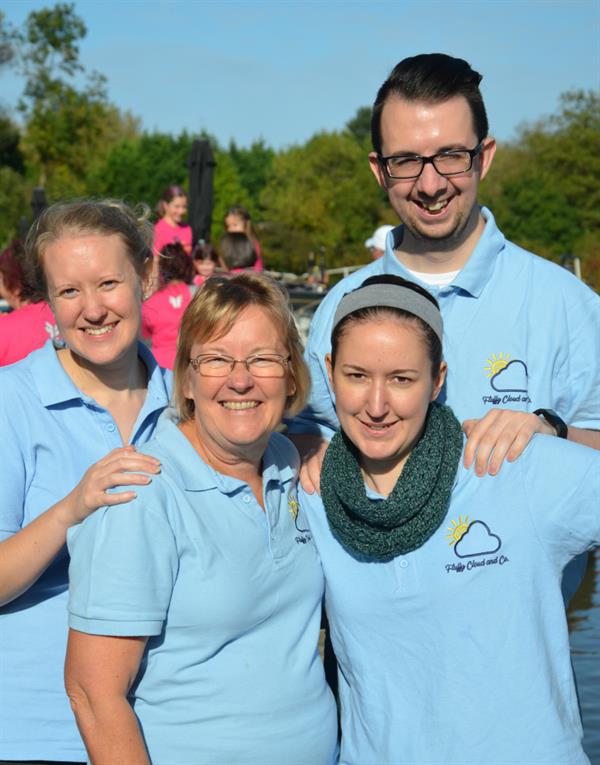 After losing her father to a brain tumour, Emma Barltrop took part in a charity walk, along with her mother, Jane Barltrop and sister daughter, Alice Sulaj, as well as her partner Chris Grenville, which has so far raised more than £13,000 for Brain Tumour Research.

Emma, 28, of Tring, Jane, 57, from Harlington, in Bedfordshire and Alice, 31, from Milton Keynes, were inspired to take part in the Grand Union Canal Walk after loving father and husband, Peter, died from an aggressive brain tumour in August 2016. Peter had experienced a series of seizures, a bleed on the brain and subsequent surgery before he was diagnosed with a grade four glioblastoma multiforme in January 2015. Since Peter passed away, the family have set up Fluffy Cloud & Co, a fundraising group under the umbrella of pioneering national charity, Brain Tumour Research, to raise awareness and much-needed funds for research.

This was the sixth year the canal walk has been held and around 90 people and five dogs took part in the 11-mile walk along the picturesque canal on Saturday 30th September 2017.

Emma, said: “Research into this disease is really important to me, as brain tumours can affect anyone at any age, but no one knows what causes them. It was lovely to have both Mum and Alice on the walk with Chris and me to celebrate Dad’s life. I hope our efforts will help raise awareness of the current underfunding for research into brain tumours.”

Walkers set out on the Grand Union Canal Walk from the Three Locks pub in Stoke Hammond, having first been tempted with coffee and bacon or sausage butties to start the day. The group then walked the 5 ½ miles to the Grove Lock pub, where they enjoyed a picnic or pub lunch.

At the end of the walk participants received a medal for being part of Brain Tumour Research’s Fighting Force. They were then able to choose from a charity menu at the Three Locks pub and order a specially created ale, "Hops for Hope", from The Leighton Buzzard Brewing Company. A percentage of both the menu and ale sales during the month of September is going to Brain Tumour Research.

Paula Rastrick, Community Fundraising Manager at Brain Tumour Research, said: “This is always a popular event for us, as the whole family can get involved. Many of those who took part in the walk know only too well the devastation a brain tumour causes. There was a strong sense of fellowship and sharing an experience, which is a very positive thing.

“We really appreciate all those who took part in the walk. Money raised on the day will go towards research into the causes of brain tumours and improving treatments and ultimately finding a cure for this horrible disease.”

To sponsor Jane, Alice and Emma, you can make a donation to Fluffy Cloud & Co via www.justgiving.com/fundraising/fluffycloudandco