Cycling challenge in memory of brother killed by brain tumour 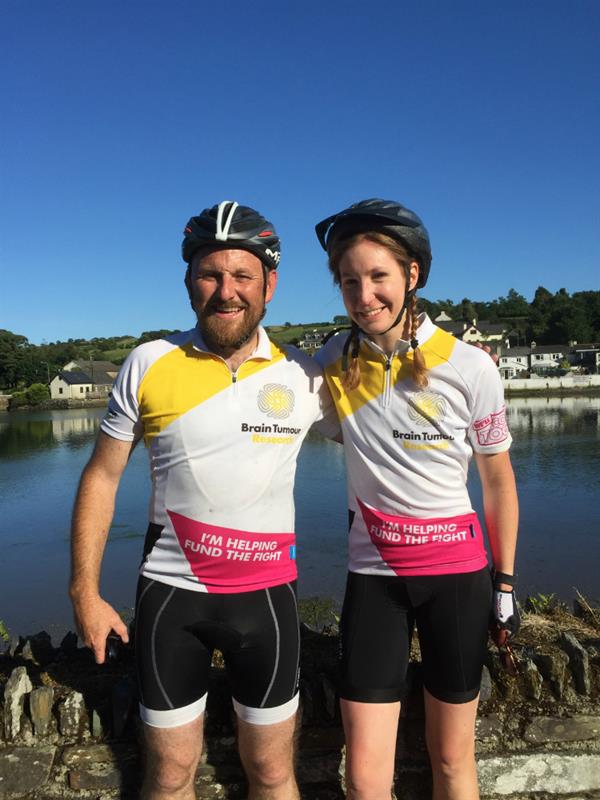 A cycling event has taken place in the Emerald Isle to raise money and awareness for the Brain Tumour Research charity.

Simon, along with his sister and two elder brothers, including David, who lives in Thornton Steward in the Yorkshire Dales, all grew up in Solihull, but with an Irish mother, they spent many happy holidays in and around Cork in their formative years. Over the weekend of 4th and 5th August, Ride4Simon Ireland took in many of those places.

The eight-strong peloton, which included David, who is married to Pauline and works for Eon, as well as Simon’s wife Sophie, are hoping their fundraising will reach a target of £5,000. Cheered on by Simon and David’s Irish and UK family, the total to date stands at a magnificent £7,000. Last September, Ride4Simon UK raised an awesome £16,000 for Brain Tumour Research.

In 2013, Simon was diagnosed with a glioblastoma (GBM) – a most aggressive and incurable type of brain tumour. A dedicated family man and talented engineer, he died in December 2016, leaving his wife Sophie and two young children Joseph and Esther.

David explained: “Simon and I were both keen cyclists, and, amazingly, post-diagnosis in 2013, a good cycle for Simon was his equivalent to counselling. He rode a significant distance to many of his hospital appointments, which was always recorded in the oncologist’s notes because it was so unusual.

“A couple of years before he passed away, Simon and I, as well as a few friends, did a 110-mile cycle sportive to raise funds for Brain Tumour Research. Despite having a brain tumour, when we finished, Simon seemed the fittest of us all!

“He remained physically really fit until after his second operation, although he often felt tired and needed to sleep more. It was only then that it started to hit home with me that Simon was deteriorating – especially as, living a fair distance apart, we weren’t able to see each other as often as we would have liked.

“Since losing Simon, I keep coming across other families who have lost a loved one, including a colleague at work. We need to do more to find a breakthrough for others facing similar diagnoses to Simon.

“As friends and family of Simon we know how shattering the diagnosis of a brain tumour is, and we hope this ride has the potential to make a real difference so that there might one day be real hope for others given the news they have brain cancer.

“Building on what we achieved last September with the first Ride4Simon, this year we headed off to County Cork, a place that was so special to Simon throughout his life and a fitting venue for this challenge.  It’s funny how I didn’t remember quite how many hills there are around the County Cork coast-line, which explains why I have very achy legs now!

“I just want to say a massive thank you to everybody who supported us, donated in Simon’s memory, came out to cheer us on or enjoy a drink with us at the end of each day – I got to see lots of uncles, aunts and cousins, most of whom I hadn’t seen for many years. And it’s not too late to sponsor us!”

Tim Green, Senior Community Fundraising Manager for the Brain Tumour Research charity said: “We are really grateful to David, Sophie and the Ride4Simon team for their support and awareness-raising. The money raised will help us in our mission to build a network of experts in sustainable research. We are funding dedicated UK Centres of Excellence where scientists are focused on improving outcomes for patients and, ultimately, finding a cure.

“For too long, brain tumours have been a neglected cancer and we cannot allow this desperate situation to continue. Sadly, less than 20% of those diagnosed with a brain tumour survive beyond five years compared with an average of 50% across all cancers.”

You can sponsor David’s challenge in memory of Simon via  www.justgiving.com/fundraising/Ride4Simon2018

For further information, please contact:
Liz Fussey at the Brain Tumour Research charity on 07811 068357 or liz@braintumourresearch.org