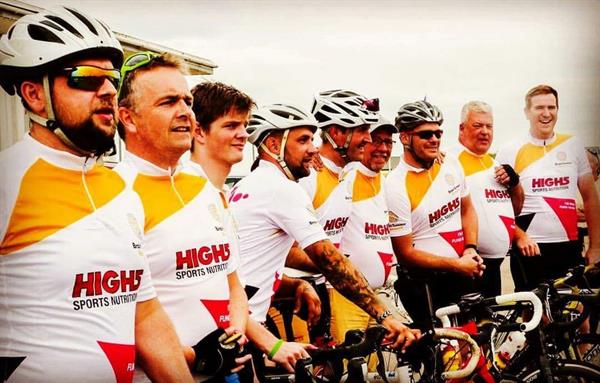 A police officer who died from a brain tumour is being remembered as 20 members friends and family members embark on a gruelling 135-mile bike ride.

Father-of-two Steve Holbrook from Great Paxton, Cambridgeshire, died just 21 months after being diagnosed with a brain tumour. An officer with Bedfordshire Police, Steve was 37 and left behind his wife, Carrie, and two young children, Emma, eight, and Mason, five.

Steve’s brother, Adam Holbrook, aged 37, is organising the ride from Maulden to Cromer Beach to raise funds for the Brain Tumour Research charity. Adam volunteers with the Milton Keynes based organisation.

Adam, who works as a chef at The Cottage Bakery in Ampthill, said: “I hope the cycle raises awareness of this awful disease and keeps Steve’s memory alive. I organised a similar bike ride last year with a team of 10, raising over £5,000. This year we have 20 riders so I hope to raise even more.”

Another of those taking part in the bike ride is 39-year-old James Slack. James, a sports and leisure facilities manager at Dunstable Town Council, grew up with Steve and the pair remained close friends into adulthood.

James, who lives in Flitwick, said: “I met Steve at nursery in Bedfordshire, so we have known each other since we were three. I feel grateful to have known such a loving and determined man and I am inspired by the strength he showed during his illness.

“Training for the bike ride has been hard as I have three daughters under the age of five keeping me busy. I’m feeling nervously excited for the challenge and it will be a privilege to take part alongside Steve’s friends and family. Not only is his brother riding in the event, his parents will be driving the support vehicle too.”

Steve is remembered by his fundraising website, Hills and Headwinds, which he set-up when diagnosed. Those who knew Steve continue to fundraise in his name, helping to fund vital research into brain tumours.

Michael Thewall, Head of Community Fundraising at the Brain Tumour Research charity, said: “We are extremely grateful for the friends and family of Steve’s support and wish them the best of luck in completing the challenge. The money the bike ride raises will go towards the charity’s network of dedicated Centres of Excellence where scientists are focused on improving outcomes for patients and, ultimately, finding a cure.

“For too long, brain tumours have been a neglected cancer and stories like Steve’s remind us all that we cannot allow this desperate situation to continue. Sadly, less than 20% of those diagnosed with a brain tumour survive beyond five years compared with an average of 50% across all cancers.”

To make a donation to Brain Tumour Research in memory of Steve, go to https://www.justgiving.com/fundraising/maulden2cromer