Couple take on challenge for research in memory of Cat Anderson, the inspiration for Cat in a Hat 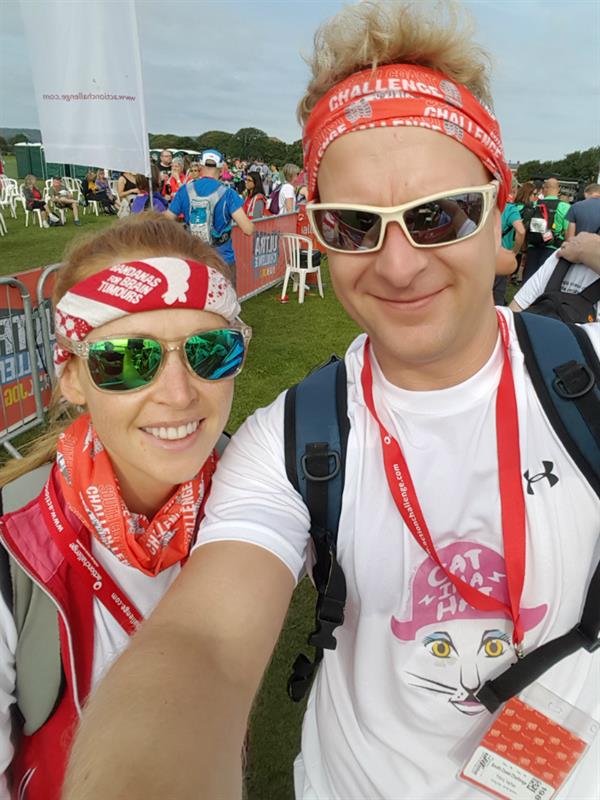 An Uppingham man, whose brother, James Tilford, was Cat Anderson’s partner, has taken on a 100km ultra challenge with his wife to raise funds for research into the disease which took Cat just weeks before her 39th birthday.

Cat, also of Uppingham, who grew up in Corby, was diagnosed with a low-grade brain tumour in August 2014, but, following surgery and a biopsy, her family and friends were devastated to learn that the tumour was in fact cancerous, although slow-growing.

Discovering that brain tumours kill more children and adults under the age of 40 than any other cancer, yet just 1% of the national spend on cancer research has been allocated to this devastating disease, the family decided to set up the group Cat in a Hat to raise funds for Brain Tumour Research.

Tragically, Cat passed away in June this year after the tumour stopped responding to chemotherapy treatment.

James’ brother, Nathan Tilford said: “Christina and I decided we wanted to do something in Cat’s memory and our love of walking led us to take on the South Coast Ultra Challenge.”

Christina explained: “We set off on Saturday morning at around 9.30am along with nearly 2,000 other intrepid walkers.

“The first part of the walk was incredibly hilly following the coastal path, which went along the Seven Sisters and past Beachy Head. After a rest stop at Birling Gap, the path went inland and we were following the Cuckmere River to the midway check point.

“We refuelled on sandwiches, cake and fruit, plus as much water as we could possible carry. The sunny conditions caught us by surprise and took its toll with red necks, burnt legs, arms and shoulders (although bizarrely mainly on the left hand side of the body as we were generally walking west towards Brighton and Hove and the sun was constantly over our left shoulder).

“We continued to walk late into the afternoon, reaching the outskirts of Brighton around 7pm.  It was very odd walking along the promenade in walking gear and carrying walking poles when everyone else was dressed up for a night on the tiles! We finally reached the final checkpoint in Hove at around 9.15pm, 55km into the 100km challenge, having walked for just under 12 hours.

“We took on food and drink at the Hove checkpoint and made our way to the apartment we had booked in Brighton. After just under five hours’ sleep we were up again to be back at Hove for a 5am registration before setting off at 6am with 250 people for the final day of walking.

“Once again the weather was amazing with blue bird skies and for the first few hours it was fantastic, walking along the South Downs Way with no other people except those trying to finish the challenge. The group quickly thinned out as the walking was again tough with a number of steep climbs and descents. One memorable moment was holding a new born piglet (just 12 hours old) when we met a pig farmer whose field was adjacent to the path.

“We reached our final destination in Arundel at around 5.15pm on Sunday afternoon. 100kms completed in 22 hrs 55 mins, with blisters on top of blisters, plenty of sunburn, and a missing toe nail!

“We felt proud and privileged to be walking on behalf of Brain Tumour Research and Cat in a Hat and have so far managed to raise just over £1,600 in online and offline donations. The challenge was reassuringly tough and it felt right that everyone’s kind donation was earned and not just given for something that was easy to do. We also know that the monies will be used in a positive way to bring better outcomes in the future for patients and that gives us immense satisfaction too.”

Cat’s father, Rab Anderson commented: “We as a family would like to thank Nathan and Christina for their monumental effort in walking 100kms in under 24hrs to raise money and awareness for Brain Tumour Research. We are especially touched that they carried Cat’s memory with them on their journey. It was a fantastic achievement and just the type of thing Cat would have loved to take on.

“James and Robert (Cat’s 18-year-old son) are coping really stoically. James is keeping very busy doing a lot of cycling and has also taken up badminton – he doesn’t want to sit at home alone. Robert had been going to take a year out having completed his photography course, but has decided to go back to Leicester College to do Film & Media Studies instead.

“Cat’s death has left a huge hole in the entire family.”

Head of Community Fundraising (South) for Brain Tumour Research, Carol Robertson, said: “We are extremely grateful to Nathan and Christina. Cat was an amazing ambassador for our charity. It’s vital that campaigners like Nathan and Christina help to shine the spotlight on this neglected cancer. We desperately need more awareness and research investment to find more effective treatments and ultimately a cure.”

To sponsor Christina and Nathan and donate to Brain Tumour Research in memory of Cat Anderson please go to www.justgiving.com/fundraising/teamtilford