Community come together in Run for Gem 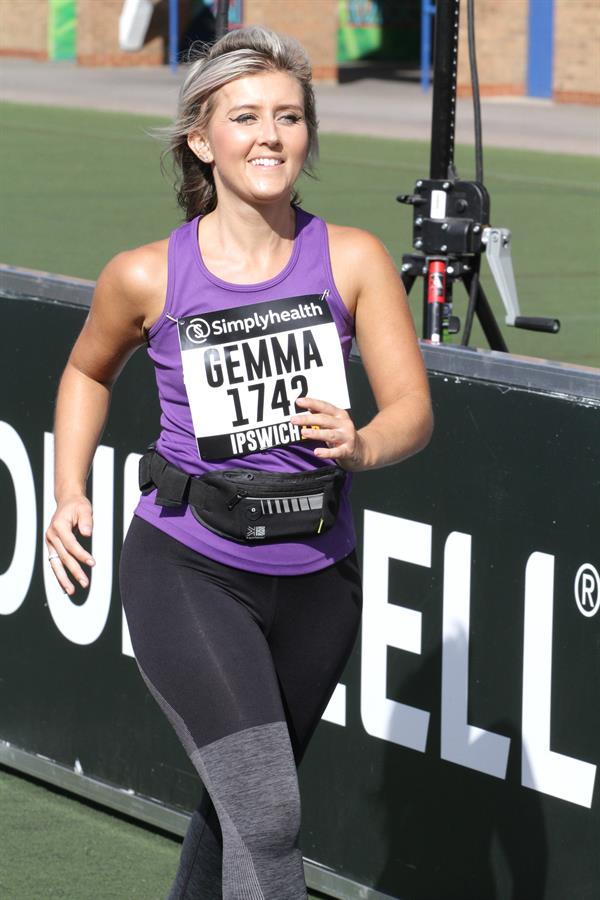 A young mum with an incurable brain tumour has inspired hundreds in her local community to sign up to Run for Gem in Colchester’s Castle Park on Saturday 8 December.

Cara Greenley, who first became friends with Gemma Edgar when they were both 13-year-olds at St Helena School in Colchester, got back in touch when she heard that Gemma had been diagnosed with an aggressive glioblastoma brain tumour.

Cara, of the Willows, Colchester, said: “Gemma and I enjoy running and got together a few times to do some training, ahead of us both running in the London Marathon this year. We also used to see each other periodically when we went on runs organised by the group Running Colchester.

“Just like Gemma, I am 33 years old and a mum of two young boys (mine are two-year-old Preston and Kenny, six) so it could just as easily be me with a brain tumour. It is shocking to learn that brain tumours kill more children and adults under the age of 40 than any other cancer.

“I wanted to do something to help to change this which led to the idea of Run for Gem to raise funds for the Brain Tumour Research charity, as well as St Helena Hospice where Gemma is currently receiving end-of-life care. Running Colchester has been doing a great job helping promote the fundraising event and we already have hundreds of people signed up to take part in a 5K run which will start and finish at the bandstand soon after 10am on 8 December.  Everyone is welcome to take part, fast or slow runners, and even families with children in pushchairs, on bikes or scooters.

“Run for Gem will take place after the normal Saturday Park Run and afterwards there will be cakes and sausage rolls, made by kind volunteers, at the bandstand for a donation to these two worthy causes.

Gemma’s brother Lee Relf said: “It is amazing what Cara is doing and so fitting – Gemma kept on running even while undergoing chemotherapy until she started to deteriorate rapidly at the end of the summer. She completed two half marathons and the London Marathon – all this year – as well as notching up her 50th Park Run, ticking off another goal on her bucket list.

“We have told Gemma about Run for Gem and she is really happy that friends and strangers alike are all continuing what she did and helping to fundraise and spread awareness of the desperate need to find a cure for brain tumours.

“Run for Gem is going to be a very moving event for people in the town. I know of people who have never met Gemma who have signed up because they feel so moved that she is a mum of two young boys – six-year-old Dylan and four-year-old Noah (who himself underwent surgery and proton beam therapy for eye cancer) and so inspired by her fighting spirit.

“Gemma continues to fight which has surprised everyone. She is very weak and sleepy now, but still smiling and still determined.”

When Gemma was diagnosed with a brain tumour in 2014, she was working as a paediatric nurse at Colchester General Hospital. Many of her colleagues have fond memories of Gemma which have motivated them to sign up to Run for Gem.

Carole Nevard, a nurse at the hospital said: “I barely know Gemma, but we have many nursing and doctor friends in common. They tell me that among other things Gemma is kind, caring, courageous and witty. She puts others first, was a fabulous nurse, a keen and very able runner and is an amazing mum to two beautiful boys.

“I have cared for some wonderful young people with brain tumours and wanted to get involved and I have roped in lots of nursing and medical friends to join us. It hasn’t been hard to get people engaged as Gemma inspired us all to get up and do our thing for Brain Tumour Research.”

Paula Rastrick, community fundraising manager for Brain Tumour Research, said: “For too long brain tumours have been a neglected cancer. Gemma and her family have helped us both to fund research into brain tumours at our dedicated centres and also to campaign for change. We thank Cara for organising Run for Gem to support research into this devastating disease and hope that the event is a huge success.”

Money raised for Brain Tumour Research will help fund dedicated UK Research Centres of Excellence where scientists are focused on improving outcomes for patients and, ultimately, finding a cure. Historically, just 1% of the national spend on cancer research has been allocated to brain tumours and the charity is lobbying the government and the larger cancer charities to increase this.

To sign up for Run for Gem please email carah62222@gmail.com

If you would like to donate to Brain Tumour Research inspired by Gemma go to www.justgiving.com/fundraising/cara-greenley2

To donate to St Helena Hospice go to www.justgiving.com/fundraising/cara-greenley1