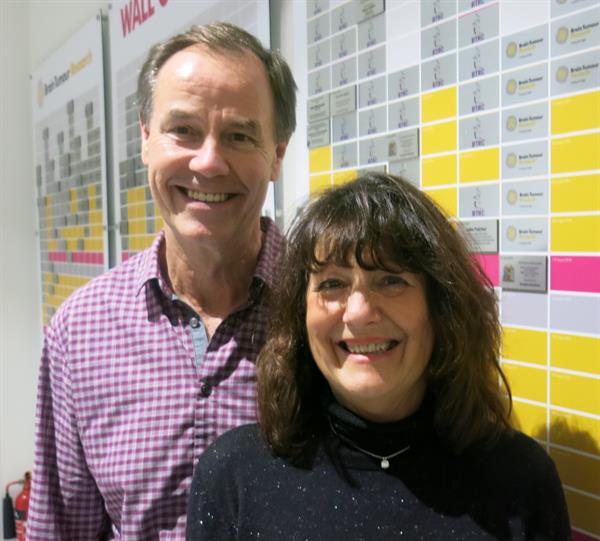 A man from Clayton-le-Woods was at Imperial College London yesterday to honour a lifelong friend who died from a brain tumour.

Dave Pinnington, 66, met with scientists at the Brain Tumour Research charity’s Research Centre of Excellence at Imperial College, London, in memory of Dave Bennett, a close friend who died from an aggressive and incurable form of the disease. The pair met as students in 1970 when Dave Pinnington was at Thames Polytechnic and Dave Bennett was at Imperial. Now, 48 years on, Dave Pinnington is supporting vital research taking place at his friend’s alma mater.

Dave Bennett was diagnosed with a glioblastoma multiforme (GBM) in 2014. The dad-of-two, from Christchurch in Hampshire, underwent two operations, radiotherapy and privately-funded treatment in Germany but he died in January 2016. He was 65-years-old and left his wife Sue, children Karina and Troy and five grandchildren.

Dave Pinnington said: “Dave was one of the healthiest and fittest people I know – even in his 60s he was going on eight-mile runs – which made it all the more shocking when he deteriorated. It opened my eyes to how cruel brain tumours can be.

“Another blow was learning how underfunded research into brain tumours is, which is what led me to fundraise for Brain Tumour Research at a Spinathon in October 2017. My wife Anne and I led a spinning event along with 20 other members from the David Lloyd Leisure Centre, Chorley. We cycled for four hours on stationary bikes and we are very proud that together we all raised £2,883 towards research.”

On Thursday 6 December, in recognition of his fundraising, Dave Pinnington was given a tour of the research facility at Hammersmith Hospital and heard from lead scientist Dr Nelofer Syed about the work taking place there. He met Kevin O’Neill, a leading neuro-surgeon at Charing Cross Hospital who told them about how the research work was being translated into new surgical tools, such as the iKnife, which can differentiate between tumour and normal brain cells during surgery.

Also in attendance was Dave Bennett’s widow, Sue Bennett, their children Karina and Troy, and Dave Pinnington’s wife, Anne. Together they placed a tile on the Wall of Hope where each tile represents the £2,740 it costs to fund a day of research.

Sue Bennett added: “Placing a tile on the Wall of Hope was a poignant experience, especially as this is the university that my husband graduated from. Brain tumours devastate so many lives but seeing all the incredible research taking place here has given me hope.”

Andrea Pankiw, community fundraising manager for Brain Tumour Research in the North West, said: “We are extremely grateful to Dave and Anne for fundraising towards the research taking place at our Centres of Excellence. It’s fitting that they should meet with scientists at Imperial College and place a tile in Dave Bennett’s memory.

“In addition to funding sustainable research at our dedicated centres, we are also campaigning for the Government and the larger cancer charities to invest more in research into brain tumours in order to speed up new treatments for patients and, ultimately, to find a cure. We’re calling for an annual spend of £35m in order to improve survival rates and patient outcomes in line with other cancers such as breast cancer and leukaemia.”

Brain tumours kill more children and adults under the age of 40 than any other cancer yet, historically, just 1% of the national spend on cancer research has been allocated to this devastating disease. To make a donation, go to www.braintumourresearch.org/donation