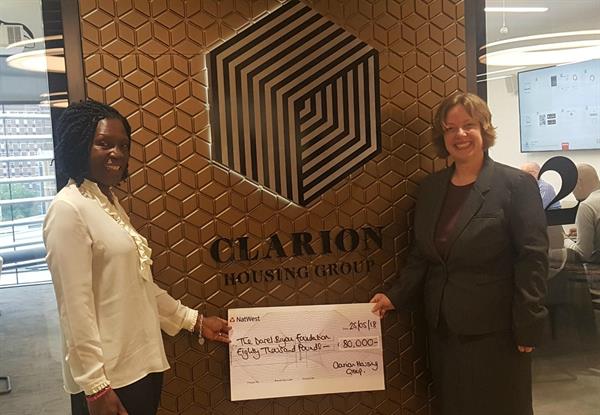 Clarion Housing Group has raised £80,000 for Brain Tumour Research in just one year, in memory of colleague Darel Bryan who tragically passed away in 2016 aged just 34.

Darel, from Beckenham, worked in Clarion’s Bromley office as a Housing Officer after joining Affinity Sutton (which merged with Circle Housing in 2016 to form Clarion Housing Group) in 2008.

Thanks to the determination of staff and match-funding from the business, 80% of that target has been reached in the first year alone. Over the last 12 months, Clarion colleagues have taken part in a range of fundraising activities such as dress down days, cake sales, raffles, quiz nights and sponsored sporting events – including football tournaments, triathlons and even marathons – raising an impressive £40,000 which has been matched by Clarion, bringing the total to £80,000.

Chief Executive of Clarion Housing Group, Ruth Cooke, said: “When we pledged our ongoing support to the Darel Bryan Foundation, raising funds for Brain Tumour Research last year we promised to do everything we could to make it a success – including matching every pound that was raised – so I’m thrilled to be presenting a cheque for 80% of our three-year fundraising target after just one year.

‘I know this money will make a very real difference by funding vital research into brain tumours and contributing towards a lasting legacy for Darel. I’m very much looking forward to continuing to support the Foundation and seeing how much more we can raise!”

Darel’s partner, Natalie, added: “Our partnership with Clarion has been truly overwhelming in its first year and Darel’s family and I have been touched by the incredible support and fundraising. Darel would have been extremely proud to know his legacy lives on and that one day this fundraisinw

It comes after the government announced it will double its funding for brain tumour research – from £20 million to £40 million – following the death of former Labour Cabinet minister Dame Tessa Jowell on 12 May.

Director of Fundraising and Marketing at Brain Tumour Research, Robin Meltzer, commented: “We are very grateful to the Clarion Housing Group for choosing to support our fundraising group set up in memory of their colleague Darel Bryan. This phenomenal amount raised in just one year represents the cost of a month’s worth of research at one of our four Centres of Excellence, bringing us closer to finding more effective treatments and ultimately a cure.”

“Brain tumours kill more children and adults under the age of 40 than any other cancer, yet just 1% of the national spend on cancer research has been allocated to this devastating disease.”

To make a donation to The Darel Bryan Foundation go to www.justgiving.com/teams/TheDarelBryanFoundation