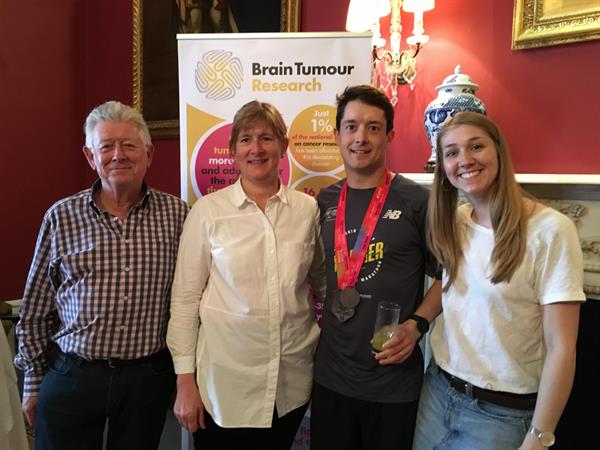 After his best friend was diagnosed with a brain tumour, one Clapham resident has completed the London Marathon to raise funds for research into the disease.

Joining tens of thousands of runners, Ben Griffiths, aged 30, was inspired to take part in the world’s biggest running event for the pioneering charity Brain Tumour Research after his best friend and cousin, Richard Greensmith, was diagnosed with a brain tumour in May 2015.

Richard, an otherwise healthy 30-year-old, was diagnosed after he experienced a seizure during a weekly tennis match. Although the tumour was categorised as low-grade, he has had to endure invasive surgery, chemotherapy and radiotherapy to control the tumour.

Ben is part of a fundraising team that includes friends and family of Richard who are all taking part in events over the next year to raise money for Brain Tumour Research.

Last month Ben, Richard and three of Ben’s cousins took on a Jurassic Coast Challenge, which saw them complete three marathons in three days along the Dorset coastline.

Ben was one of 40,000 runners taking part in the event which was started by The Queen from the grounds of Windsor Castle. It was the 38th London Marathon to take place since the first on 29th March 1981.

Ben said: “Completing the London Marathon is such a personal achievement for me as it really is the race of all races. After our running challenge last month, I felt confident that I could do it. Though the weather did make it a bit more of a challenge! There is little known about this disease, so it’s important to me to do what I can and help raise funds for research.

“Richard and I are not only best friends, but are also cousins. We were even best man for each other. What he has had to go through is awful and he has been so positive all the way through. He is a constant inspiration to me every day. Knowing I’ve helped raise nearly £13,000 so far for Brain Tumour Research is such a great feeling.”

The money Ben raises will go towards the pioneering charity Brain Tumour Research which funds a network of dedicated Centres of Excellence where scientists are focused on improving outcomes for patients and, ultimately, finding a cure.

Janice Wright, Community Fundraising Manager for Brain Tumour Research, said: “Brain tumours kill more children and adults under the age of 40 than any other cancer – and more men under 45 than prostate cancer, yet just 1% of the national spend on cancer research has been allocated to this devastating disease.

“For too long, brain tumours have been a neglected cancer. Stories like Richard’s remind us all that we cannot allow this desperate situation to continue. We are extremely grateful for Ben’s support and offer our congratulations to everyone who took part in this year’s event to raise money for charity.”