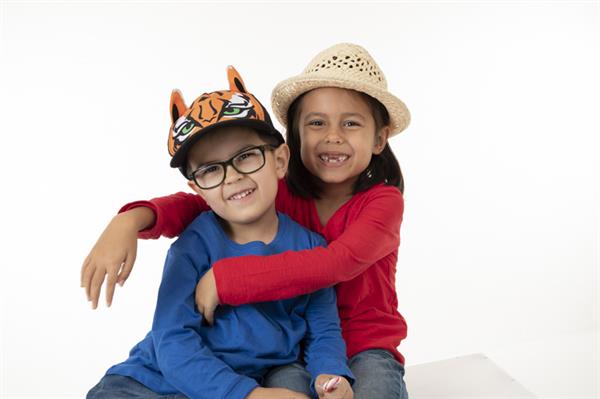 Children of all ages are getting their hats on to help find a cure for a devastating disease which has touched their lives.

The stars of this year’s Wear A Hat Day campaign for the Brain Tumour Research charity have all either been bereaved by a brain tumour, are living with a brain tumour or have a close family member who has been diagnosed.

The kids, aged one to 13, are donning their best headwear from beanies to cowboy hats, trilbies to Panamas, baseball caps to novelty headpieces, and are asking others to join them for Wear A Hat Day 2019, the UK’s premier brain tumour awareness event. This year, it takes place on Friday 29 March and is expected to smash all records as it marks its 10th year.

Among the children featured in the charity’s marketing campaign are Myah Bell, aged four, from Gloucester, who underwent surgery at 10 and a half months; Solihull brother and sister Rafaele and Siena Guglia, seven and six, whose grandad died from a brain tumour; Peebles siblings Chloe and Oscar, 11 and eight, whose dad Matt Lowther died aged 38; and 13-year-old twins George and Jasmine from Cowbridge who lost their dad Hugh Walker.

Helping to promote Wear A Hat Day in London are South Woodford siblings Layla, six, and Daniel, four, who lost their dad David Hetherington to the disease; Myla Hall from Southgate whose dad’s friend died from a brain tumour in 2015; and Charlton sisters Rebecca, Gabriella and Sophia whose sister Isabella Coomber passed away when she was just five years old

Children from the North West and North East are also taking part in the campaign: one-year-old Annabelle Taylor whose dad Neil was diagnosed in 2017 will raise awareness in Greater Manchester; and Charlie and Jess Leatherbarrow, aged nine and six from Liverpool, are taking part in memory of their dad, David Leatherbarrow.

The children of brain tumour survivors can also be seen in the charity’s marketing campaign: Maria Pata from Buckingham was diagnosed in 2010 and her children Gaizka, 11, and Endika, six, are taking part, as are Charlie and Phoebe Giddings, 11 and eight, the children of Halifax patient Charlotte, and four-year-old Reuben Wood, from Eastbourne, whose dad Graham was diagnosed in 2014.

Corporate supporters already signed up for the fundraiser include Specsavers, Hobbycraft, and Venture Photography – the latter worked with families across the UK who have been affected by brain tumours to create the portraits used in the campaign.

Sue Farrington Smith MBE, Chief Executive of Brain Tumour Research, said: “I know that people will be both distressed and inspired to hear the stories of those who are helping us to launch Wear A Hat Day 2019. All of these families, like my own, know the pain of a brain tumour diagnosis.

Wear A Hat Day has raised over a million pounds since it was launched by Brain Tumour Research ten years ago and is the culmination of Brain Tumour Awareness Month in March. The big day will see schools, workplaces, families and individuals across the UK fundraising and taking part in fun events to raise awareness of brain tumours and help fund life-saving research.