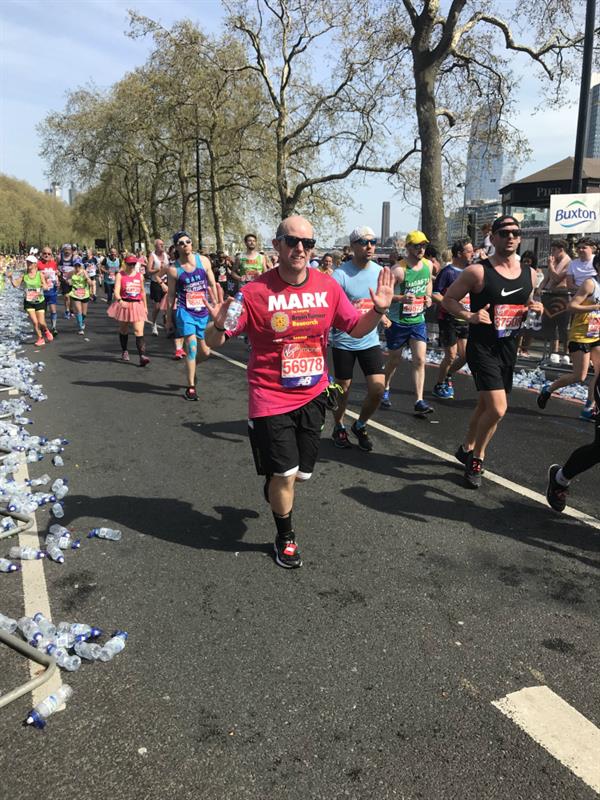 A chef from Chesterfield in Derbyshire has completed the London Marathon in memory of his wife who died from a brain tumour. Mark Bingham, aged 35, took part in the world’s most famous running event to help raise funds for research into the devastating disease.

His wife, Fiona, a 33-year-old career advisor, was diagnosed in 2015 with a grade three astrocytoma. Her diagnosis came after a visit to Boots for prescription sunglasses when opticians discovered pressure behind Fiona’s eye. She was referred to Chesterfield Royal Hospital where CT scans revealed an abnormality and Fiona was given an MRI test and then diagnosed with a brain tumour. Following her brain tumour diagnosis, Fiona had surgery, chemotherapy and radiotherapy to battle the disease but sadly in March 2017, just two years later, she passed away.

Mark, a chef at Wards Garden Centre, said: “I am absolutely knackered but I couldn’t be happier that I’ve completed the marathon. Fiona would say I’m crazy for doing it but I’m sure she’d be proud that I’m raising money for research into brain tumours.

“So little is known about brain tumours which is why research funding is so crucial. I’m hoping to raise at least £3,500 for scientists to continue trying to find a cure.”

Mark was one of 40,000 runners taking part in the event which was started by The Queen from the grounds of Windsor Castle. It was the 38th London Marathon to take place since the first on 29th March 1981.

The money Mark raises will go towards the pioneering charity Brain Tumour Research which funds a network of dedicated Centres of Excellence where scientists are focused on improving outcomes for patients and, ultimately, finding a cure.

Michael Thelwall, Head of Community Fundraising for Brain Tumour Research, said: “Mark’s determination and commitment are fantastic and I hope his story will provide inspiration to others whose lives have been affected by a brain tumour.

“Brain tumours kill more children and adults under the age of 40 than any other cancer – and they kill more women under 35 than breast cancer– yet just 1% of the national spend on cancer research has been allocated to this devastating disease.

“For too long, brain tumours have been a neglected cancer. Experiences like Fiona’s remind us all that we cannot allow this desperate situation to continue. We are extremely grateful to Mark and offer our congratulations to everyone who took part in this year’s event to raise money for charity.”