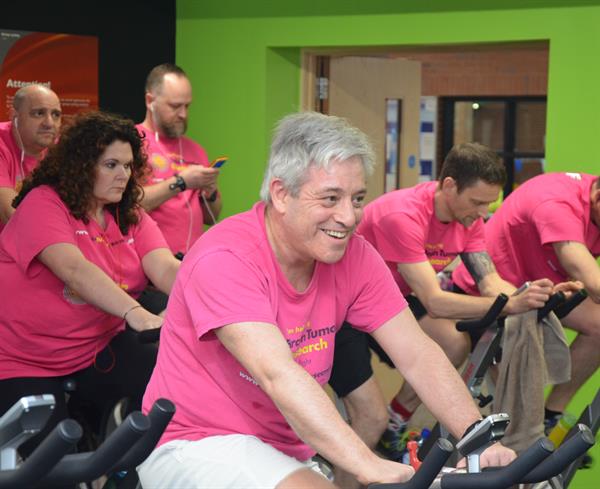 Charity chief Sue Farrington Smith is once again appealing for people to join a national spinathon challenge to help find a cure for brain tumours.

Sue, who lives in Padbury and is Chief Executive of the pioneering charity Brain Tumour Research, is appealing for people to join an army of supporters across the country who will be thundering through the miles on exercise bikes in return for sponsorship.

Money raised from the national event will fund vital research at a network of Brain Tumour Research Centres of Excellence where scientists are focused on improving outcomes for patients and, ultimately, finding a cure.

Brain tumours kill more children and adults under the age of 40 than any other cancer yet just 1% of the national spend on cancer research has been allocated to this devastating disease.

Sue has lead a team of cyclists for the last three years but is handing over the role for 2018 to Carol Robertson who is the charity’s Head of Community Fundraising. Carol is recruiting team mates to join her and get on their bikes on Saturday 3rd February 2018 at Buckingham’s Swan Pool and Leisure Centre. They are aiming to reach a team target of £2,740 to fund a day of research at one of four Brain Tumour Research Centres of Excellence.

Carol said: “Sadly, brain tumours are indiscriminate and can affect anyone at any time. I am challenging people to step up and get pedalling; this is a fun event with a serious message and everyone taking part will be helping to make a difference.

“I need at least 24 people to join me to pedal with us for at least one hour between 11.30am and 3.30pm for On Yer Bike for Brain Tumour Research. And those who want to be involved but are unable to cycle can also help by volunteering at our charity stand, welcoming participants and handing round refreshments.”

This will be the third time an On Yer Bike for Brain Tumour Research event has been held in Buckingham. On one previous occasion Sue was joined by the Rt Hon John Bercow MP for Buckingham and Speaker of the House of Commons, who is also a patron of the charity.

To join the team in Buckingham contact Carol Robertson on 07817 878407 or email Carol@braintumourresearch.org. Carol is also the contact if you would like to hold your own event or join a team elsewhere please.

The first On Year Bike event was held by Derbyshire couple Paul and Jen Halfpenny. The couple had only been together for a few months before Paul became unwell. He was diagnosed with a brain tumour and passed away in 2014. The event, now held in Paul’s memory, has raised more than £50,000.