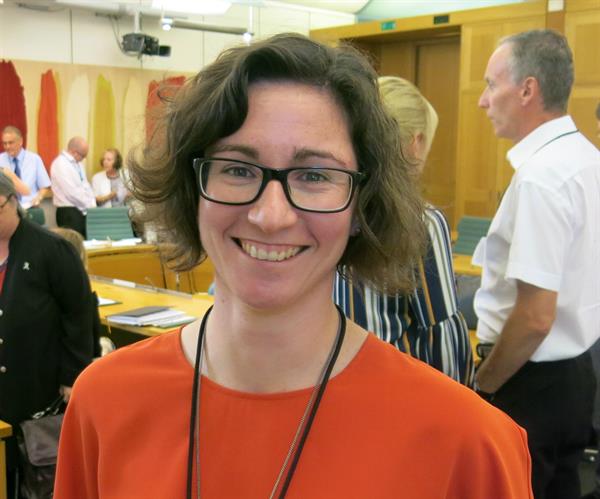 The university friend of a young man killed by a brain tumour visited Westminster to hear MPs and clinicians review a year of momentous progress.

Lydia Fenny, from Docklands, attended the All Party Parliamentary Group on Brain Tumours (APPGBT) at the House of Commons on Tuesday 17th July.

She was among families, patients, clinicians, carers, scientists, and MPs at the event as the group set out priorities for the forthcoming parliamentary year. They heard that the APPGBT would drive forward recommendations of an inquiry into the social and economic impacts of brain tumours when it reports in the autumn.

Among the speakers was Sue Farrington Smith, Chief Executive of the Brain Tumour Research charity, who said: “We are proud to have played a key role as the APPGBT has campaigned for change over 12 years. We now look forward to the inquiry report as well as continuing to see the impact of the newly-formed Tessa Jowell Brain Cancer Mission along with new funding commitments and other initiatives announced this year.”

Phil Blackmore, a financial analyst, was diagnosed with a low-grade brain tumour in August 2016 at the age of 31 and his sudden death, months later on New Year’s Eve, has inspired Lydia and many others to raise funds and awareness for research into brain tumours.

Lydia said: “I saw Phil just a few weeks before he died and he seemed to be doing so well. For him to die so suddenly and at such a young age just opened my eyes to how cruel this disease is and to how many people are experiencing the devastation that it brings.

“It saddens me that brain tumours kill more children and adults under 40 than any other cancer, yet just 1% of the national spend on cancer research has been allocated to a cure. The least I can do in Phil’s memory is try and help to change this. I was pleased to see my MP Stephen Timms at the APPGBT and I look forward to continuing to campaign with the Brain Tumour Research charity.”